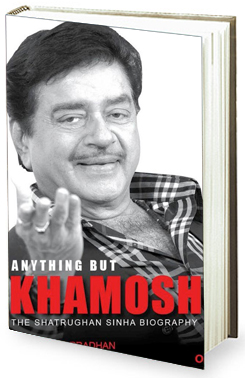 If there are any biographies/autobiographies/memoirs that have actually made a major impression amongst Bollywood book lovers, these have to be Dr. Gayathri Sreekanth's 'The Name Is Rajinikanth' (2008) and Naseeruddin Shah's 'And Then One Day' (2014). Even though quite a few other biggies have arrived in the meanwhile as well, none have managed to score as high as the books written on Rajnikanth and Naseeruddin Shah.

Now, 'Anything But Khamosh - The Shatrughan Sinha Biography' joins the ranks!

A superb book by renowned columnist, critic and author Bharathi S Pradhan, this 250 odd page affair is an outcome of effort that spans across 7 years. This was the kind of time that she spent in penning this book and it is all indeed worth it, if one looks at the sheer content which is on display here.

For starters, it is tough to put together a book on a powerful individual who has not just made a mark in Bollywood but also established his credentials as a seasoned politician. For someone who is currently active in the world of politics, you expect a slightly diluted affair in the offering. However, to my surprise, the book turned out to be as honest as it can be, and for that one has to credit Shatrughan Sinha as well as Bharathi S. Pradhan to flesh it all out so very well.

Time and again, one misses the very subject of a biography missing from action in a book. However, in 'Anything But Khamosh', there is no such complain as Shatrughan Sinha not just makes himself accessible like no one else in the recent times but also goes entirely candid in his many admissions related to personal, political, social and of course filmy life.

This is what pretty much explains the manner in which he goes about narrating his love life in great detail, something that one wouldn't have anticipated in the wildest of dreams. One would have expected that at most a couple of pages or more would be devoted on this subject but Shatrughan Sinha bares his heart out an narrates his love story with Reena Roy in such great detail that one almost feels like sitting next to him while he gets into a storytelling mood. This isn't all as there are parallel stories being narrated about how he and his wife Poonam Sinha resolved things between them and today are a happy couple in love.

Meanwhile, there is a lot that is also told about the manner in which he and his close family members (the three brothers) estranged over a period of time. While Shatrughan Sinha shares his point of views, it is wonderful to see Bharathi go an extra mile and actually pick the point of views from the other brothers as well, hence ensuring that for a reader it doesn't come across as a lop sided view, something that one usually encounters not just in biographies but even other routine write-ups that turn out to be totally star-centric.

As for his life in politics, there are major chapters devoted to that as well and while this one gets supremely candid as well, especially the places where his relationship within and outside the BJP is explored, it has to be admitted that only those with an interest in his political life and journey would be interested in gathering so much details.

This is the reason why rest of the book, which is about his journey as a youngster who made his way into Bollywood, and the years of stardom that followed after that, makes for a great read. In fact, it is also quite interesting to see that he doesn't shy away from calling a spade a spade and even mentions things that he is not too fond of when it comes to his children. Not many would have attempted something like that!

The icing on the cake though is the detailed account which is shared around his rivalry with Amitabh Bachchan. While Mr. Bachchan comments in the book as well and so does Shatrughan Sinha, there is some straight talk by Salim Khan on this matter (considering the fact that he along with Javed Akhtar wrote Kaala Patthar, a film which brought Shatrughan Sinha and Amitabh Bachchan together on screen) that settles it all without leaving much to doubt.

Want to check out what he said? Well, pick up the book then and read it through. It can be pretty much guaranteed that you would be thoroughly entertained!

"I hear echoes of my own struggle in Sushant…

“I didn’t have Akshay Kumar in mind,”…

"This Rs. 25 crore charity has turned…