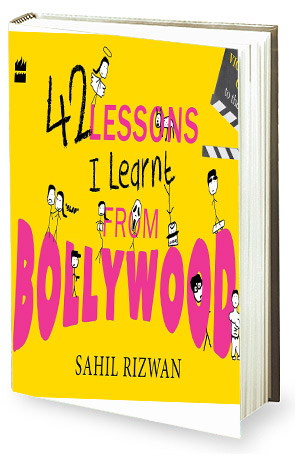 Vigil Idiot - Now anyone who has heard of this name pretty much knows that the comic strip by Sahil Razwan is a rage on the world of internet. With every recent Bollywood release getting a special treatment via Vigil Idiot strip, entertainment has been in the offering for quite some time now. With his visual representation of some largely iconic as well as stupid scenes from films, both blockbusters as well as disasters, Sahil has garnered an extraordinary fan base on internet.

Now that he has come up with a compilation of 42 movies from the 90s that were just waiting for the Vigil Idiot treatment, one is, well, up for a treat. In a book which is aptly titled 42 Lessons I Learnt from Bollywood, there is instant connect formed with a reader as you just grab it with both hands. Well, literally, since the book's landscape format warrants that you actually grab it with both hands or turn over the pages by keeping it on a table. Preferably, a coffee table!

Coming to the book, it is a super delight by all means as movies as varied as Dilwale Dulhaniya Le Jayenge and Raja Ki Aayegi Baraat are picked up for scrutiny. So if you wondered how Shah Rukh Khan could actually win heart of Kajol or Rani Mukherji could actually fall in love with her rapist, this is the book for you. If you thought that Hum (my all-time favorite) was intelligently written and Khalnayak (a rage on its release) was a nail biting action thriller then just go through the pages of the book and you would see wide loop holes there.

However, what catches one's attention is the humor that Sahil brings in every chapter of his. He never once lets the fan boy side of him disappear due to which as a true Bollywood lover, he points out all that was wrong with a film and yet makes you just go back, grab the DVD and watch the film all over again. Now this is what makes the write-up entirely different from a review because while the latter either forces you to check out or makes you look away from a film, Sahil ensures that you fall in love even with a bad product. Or perhaps make you look at a good product in a different way and still fall for it.

As a bonus element, 26 year old Sahil shares a story of his own childhood per film and trust me, you would relate to each one of these if you are a 80s or a 90s youngster. Such is the manner in which he manages to fetch your attention.

Of course, Sahil's brand of humor also means that for those wary of language and profanities, this one is certainly not the one to be celebrated. The cuss words are aplenty; the tone is adult and the treatment below the belt for practically anything and everything. This means those who like to display their books proudly in a home library, this one is perhaps not the one you want to be in easy reach of children.

As for those who love this brand of humor, the book is a treat by all means as you never get bored when films like Gupt, Koyla, Baazi, Baazigar, Waqt Hamara Hai, Tarazu, English Babu Desi Mem, Hum Aapke Hain Kaun, Kareen, Laadla, Main Khiladi Tu Anari, and many more come your way. The fun never ceases to stop right through this 400 odd page excellently illustrated book where you just smile away, and at places even get into uncontrolled laughter at many places.

Trust me, I was reading it while on a flight and since I could technically not 'fall off my chair', I was forced to just giggle away even as my co-passengers looked on.