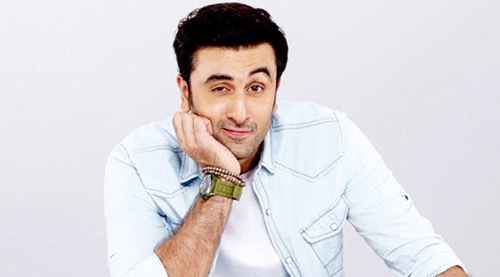 A star on whom Bollywood is betting to be a superstar very soon - That's Ranbir Kapoor for you. Eight years in the business, many hits, a few flops and some fabulous

performances later, Ranbir stays on to be as grounded as ever. For someone who knows the ground reality when it comes to the world of films, courtesy the pedigree that he comes from, Ranbir Kapoor

has managed to build a strong persona for himself. So much so that while a lot is on stake for Bombay Velvet, he is maintaining a cool stance with no false word whatsoever. We get into a

chat with the man who should well move on from being 'the next big thing'!

Ranbir and Anushka coming together for the first time in a film that is not really a quintessential romcom - How does that play in Bombay Velvet?

Firstly Johny and Rosy are very top notch characters for anyone to play. These are characters that are not written a lot. Today, films have become very topical and real; they reflect current

society. In that sense, I was lucky and excited because Anushka Sharma is one star who is emotionally naked on screen. She comes as a soldier; she doesn't come with any trappings of being a star.

She is not judgmental about people. I think these qualities come well on screen.

So how does a street-fighter find love in Bombay Velvet?

First of all it is a misconception that I am playing a street-fighter in the film. I am playing this boy who has an ambition to be a big shot in life. Back then in the 60s there was no boxing. So

just like you had seen Amitji in Naseeb doing his cage fight where people used to go come and let their frustration out, I too am enjoying being a part of such set up. That said, film mein

mera yeh pesha nahi hai. (Smiles) Thankfully Anurag didn't want me to make body for the role. Achcha hi hai, main kya-kya karoon, body banaun ya acting karo. To do both is very difficult. At that

time there was no gym either so I kept my T-Shirt on.

You have still gone ahead and delivered a few punches though.

Yes, I had to learn a particular form of fighting. Otherwise in my films I have not given even a thappad to anyone; zyaadatar gulaab ka phool hi diya hai (smiles). In that perspective, Bombay

Velvet is the most angry role that I have done. In Rockstar there was angst, not anger. In Bombay Velvet, the situation where Johny comes from brings in a lot of intensity as it

is required for him to survive in life. It is not out of choice but out of necessity.

So how did you go ahead and deliver something that went as per Anurag's vision? Was it tough?

It's my job to deliver and marry the director's mind. I do that with every film. I try to spend as much time as possible with the director since he knows the story and the character. Also, you have

to do it offline before hitting the sets. When you reach for the shoot, there are eight hours available which have to go into production, not creation. Not that I am a method actor who has to go

and stay in Kamathipura to understand life there but then you do gain a lot from real life references and vulnerabilities. So when the entire crew also comes together and the marriage with

director's vision happens, you can see the results.

To begin with though, when the first promo came out, audience didn't really get that vision entirely.

Yes, we didn't get a good response for the first promo. We didn't know how to communicate the film. This genre hasn't been made before so we were struggling to realize what to tell audience. Later

we thought that we should tell audience what we have made. Why sell some other film? If this is a space, then why to cheat the audience? Sometimes there is insecurity and this is what happened with

us. I would like to confess that in the first promo this is what happened. Anurag was unhappy and he said that this is not a film that I made. So we all had a meeting and he said that let's put out

what we have made; let's give it to the audience. If this is a space then tell people about it, tell them the truth. Hence, second trailer is the world and intensity of the film.

You must be really looking forward to the commercial response for the film as well.

am genuinely entertained with what I have seen in the film and I hope that audience is also entertained. I am not taking audience for granted. I did that with Besharam and this is where I

fell flat on my face. When we are taking money from the audience, we have to deliver. If they sit and wonder what we are doing then that's a problem. We have not tried to make an intelligent or a

massy film, we have just made a good film from our heart.