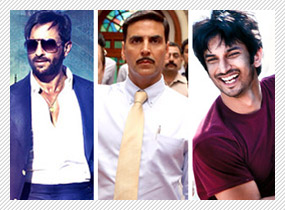 Amidst this tumultuous first phase of the year, only five films managed to shine in the first quarter, with Race 2 leading the pack amongst the 40 odd movies released this year, which accumulated Rs. 440 crores at the domestic box office. Race 2 managed to surpass the Rs.100 crore mark despite receiving scorn from many critics, although commercially the circus is not so serene. The UK market collected only Â£ 1,851, 742 in the first quarter, a 12% dip from what 2012 witnessed. While on the contrary, business in the US market increased by 4% raking in a heavy $ 4, 99, 4311 in box office collections. Bollywood Hungama's Philip Bode gets renowned film critic Taran Adarsh and Tanuj Garg, CEO of Balaji Motion Pictures, to chat about - What affects the box-office collections, 2013 being the year of small budget films, harboring false notions and the overall business in the first quarter of 2013 in Bollywood.

Even though 40 films released in the first quarter, Tanuj feels the number is comparatively less than last year. Talking about the domestic market's business going up by 22%, he says, "In IPL season, the business would accelerate. The cinema going culture is increasing along with the number of screens in India; this is all contributing towards the growth in collections. I believe that there is a lot of scope right now; data has proven that the most successful film's efforts are contributed by only 5-7% of the Indian population who visit cinemas. Theatrical ticket sales is growing, I imagine this exponential growth to increase in the years to come."

Taran feels that the year started on a good note with Table No. 21, but only to end on a disastrous note with "Himmatwala sinking faster than the Titanic" as he puts it. He says, "I guess somewhere down the line there is a saturation point for masala movies, for the 80's and 90's going movie folk, people are looking for newer concepts and content. I think the spike in the domestic box-office is because of so many screens opening up and the hike in ticket rates. Himmatwala opened to about 3200 screens this year, while last year, a film could only reach 2500 screens."

The stats of first quarter business last year shows a significant difference compared to 2013, this year, the US market saw business rise by 4%, while business in the UK plunged by a hefty 12%. Kai Po Che! Collected over a million dollars and Himmatwala left the makers dismayed towards the US market. Shedding light on the probable angles that determine the vacillation in figures, Taran says, "Several distributors have told me that the UK markets is slightly going downhill while the market in US is going up. This could be due to the fact that people's taste for content in the UK is very different than the American market. Kai Po Che worked well in the US while it didn't make the same impact in UK. Whereas masala films have worked in the UK, the market didn't mimic the same trend in the US. Himmatwala is practically a bigger disaster than Joker in the US."

Tanuj believes that a radical difference in taste is the issue when it comes to foreign markets. Talking about the current scenario with the foreign markets in the first quarter, he says, "Non-residential Indians living abroad react and consume Bollywood films very differently from their native counterparts. The culture, needs, attitudes and preferences are very different. A film that's having a good run at the domestic box-office, doesn't necessarily work the same way in other countries. I think the US and Middle East markets have been rather encouraging in terms of film releases. While the dip in the UK market could be due to the revenue sharing system, with exhibitors not being as feasible as they once were and genres that work are getting restricted as well. The UK market has a different breed of fish altogether; the audience profile is different from the US and Middle East markets."

Coming back to the Indian market, ironically, despite getting thumbs down by critics, Race 2 has managed to garner Rs. 100 crores at the domestic box-office. However, the trade pundits believe that Race 2 only recovered a little more than making cost. Pointing out the reasons behind this, Taran says, "The making cost of Race 2 along with advertising works out to Rs. 90 crores, so it is irrelevant to take a Rs. 100 crore flop in good light. The business it generated is hardly anything, but on the other hand, if a film is made for Rs. 20 - 25 crores and if it generates Rs. 40 crores, then we can consider it a hit. In observing the trade aspect, Race 2 did well, but the kind of business it ought to do is missing. This is mainly because it was an expensive film and UTV had it at an expensive rate. Abbas and Mustan have really spent a lot of money on the film and it is not a major money spinner."

Overlooking the fact that the massive budget of Race 2 failed the film, Race 2 despite getting not so positive reviews did manage to gross 100 crores at the box office. So how much do reviews affect the box office collection of movies? Tanuj ponders over the obvious school of thought of reviews positively influencing collections. He says, "This has been one of the longest disputes in the industry. We have had films that have not been reviewed well, but have conversely worked well in the box office. Kya Super Kool Hain Hum wasn't particularly reviewed well by the media but still ended up collecting Rs. 45- 50 crores at the box-office. So, it is inexplicable if reviews actually make a difference with the collections."

Watch this space for Part 2