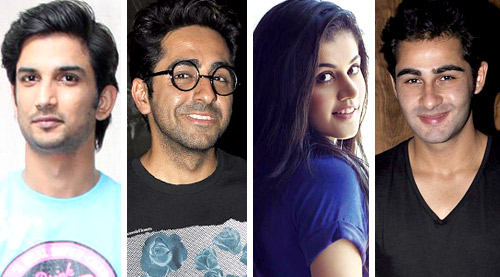 Sushant Singh Rajput: "I love what A R Rahman Saab's 'Ma Tujhe Salaam' and 'Lukka Chuppi' does to my soul. Every time I hear these numbers I am reminded of how Indian I am. While watching Rakeysh Mehra's Rang De Basanti and Ashutosh Gowariker's Lagaan, I feel the same surge of patriotism. I also feel very inspired by Tom Cruise in Top Gun."

Ayushmann Khurrana: "'Vande Mataram' by A R Rahman and Lataji is my favourite, followed by 'Mera Rang De Basanti Chola' which inspires me no matter who sings it. The most inspiring movie I've seen is Rakeysh Omprakash Mehra's Rang De Basanti. It's contemporary relevant and non-jingoistic."

Mohit Chauhan: "When it comes to patriotic songs nothing inspires me more than the national anthem 'Jana Gana Mana'. It never fails to stir something urgently nationalistic within me...And the most inspiring film I've seen would have to be Chetan Anand's Haqeeqat."

Tapsee Pannu: "The title track from Shimit Amin's Chak De always inspired me. The film too does more of the same to me."

Armaan Jain: "There's nothing more inspiring than our national anthem. No matter when or where it plays it brings tears to my eyes. I love A R Rahman's 'Maa Tujhe Salaam'. I love Faiz Ahmed Faiz' sher on nationalism 'Pehli Si Mohabbat' and Rabindranath Tagore's 'Where the mind is without fear'.

Mohit Marwah: "My favourite patriotic song is 'Vande Mataram' by A R Rahman. The most inspiring week for me at the movies was during the year 2001 when I saw Lagaan and Gadar back-to-back on the same Friday in Delhi. The two films made me proud to be an Indian. I drove straight to India Gate with my friends after the movies."

Ali Fazal: "A.R.Rahman's version of 'Saare Jahan Se Achcha' never fails to move me. And Lagaan is a film that inspired me immensely. It's about the victory of the underdog. A truly Indian saga."

Mohit Raina: "'Mere Desh Ki Dhari Sona Oogle' from Manoj Kumar's Upkar is one song that fills my heart with the pride of patriotism. And the film that has inspired me the most is Richard Attenborough's Gandhi."