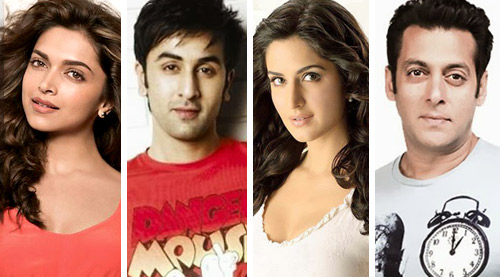 Ranveer Singh: About time he was freed from the burden of being a constant attention-getter. How liberating it would be for this exhibitionist to just relax and not make every moment of his life a celebration of flamboyance.


Deepika Padukone: Freedom from being the well-behaved politically correct convent girl ... Deepika Padukone is always right in her attitude. Why can't she be as fetchingly flawed in person as she was in Cocktail and Ram Leela? Loosen up, girl.


Priyanka Chopra: Every director who has worked with Priyanka Chopra says she talks incessantly. It's as if she wants to fill the vacuum in her heart. This Independence Day, we hope she finds a love that would fill up that empty space in her beautiful heart.


Katrina Kaif: It can't be easy to be a woman in love who is not allowed to shout her love from rooftops. This Independence Day, we hope Katrina Kaif can finally come out of the weird oath of silence regarding her love life.


Salman Khan: Wishing him freedom from his self-proclaimed virginity and single status.


Mallika Sherawat: She has done it again. Worn the tri-colour in an offensive manner. This Independence Day, Sherawat should vow to stay away from controversies for at least a few months.


Smriti Irani: She's been 'yale'ing all over the place about her educational qualifications. On August 15, we wish a proper degree from a proper university for Ms Irani. That's what we'd call educational freedom.


Hrithik Roshan: This Independence Day how we wish our super-hero's action-packed life some reprieve. May he be liberated from his health and domestic problems. Too much Bang Bang, yaar!


Alia Bhatt: Ever since she made her debut two years ago, our film industry's resident baby-doll has been kissing every hero she has worked with. We wish her freedom from the smooching epidemic.


Karan Johar: Since this is the day our country acquired its freedom, we would like to wish Karan Johar freedom from the scourge of losing his best friends, first Shah Rukh Khan and then Kajol. It's all about loving one's best friend's enemies, you see


Shah Rukh Khan: Every time he opens his mouth he lands himself into a controversy. Freedom for freedom of speech for Shah Rukh, we say. Give him the liberty to dance with the lady cops.


Aamir Khan: The nude poster has got this conscientious actor more attention than he had bargained for. We wish for Aamir Khan a khadi loin cloth to cover his tape recorder-concealed modesty in a Gandhian garb.