Salman Khan is currently busy hosting Bigg Boss season 12 and is climbing up on popularity charts as usual with his funny antics on the show. While his television commitments are on, she also is concentrating on his film at hand: Bharat. Apart from this, we also was running pillar to post promoting LoveYatri with Aayush Sharma and leading lady Warina Hussain. While Bhai is busy with his projects, his brother in law and producer of Bharat Atul Agnihotri took to social media to share a throwback picture of Salman Khan from the sets of Bharat from Abu Dhabi. Here, Salman is casually chilling on the sets dressed in maroon pants and a black ganji. 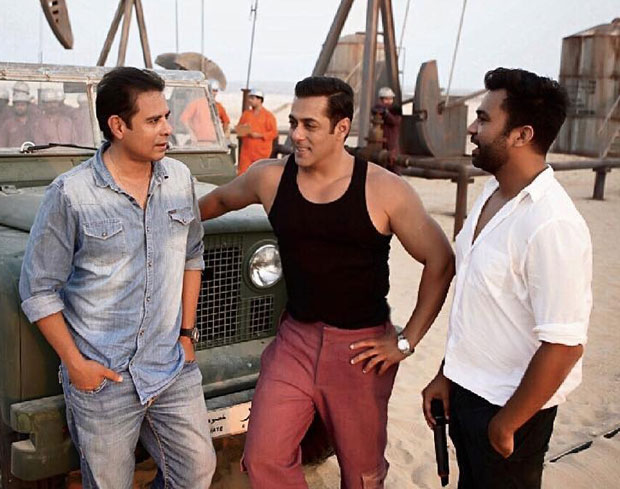 He looks effortlessly stylish in the pic but what’s more? He drops a major hint about his sequence with Varun Dhawan with this still. So, before sharing this picture, Atul had shared one more picture with Varun thanking him for doing a special appearance role in the movie. If you look at both pics, Salman and Varun are twinning in black ganjis. This means that both Varun and Salman will either have a Judwaa reference or something similar to brotherhood.

Salman’s LoveYatri is doing lukewarm business at the box office and did not seem to impress masses that much. Salman will be busy with Dabangg 3 after finishing his current commitments. Bharat will come out in June and starts Katrina Kaif in lead role with Salman. Jackie Shroff will play his father. The film will also star Sunil Grover and Disha Patani.

#Bharat thanks you for your love and support ????❤️???? @varundvn @bharat_thefilm

Also Read: Bharat: Varun Dhawan to feature in the Salman Khan starrer in a special role