Bollywood's superstar, Salman Khan, was seen working his sweat off in Middle East’s oil fields for his most anticipated upcoming movie, Bharat. It is the director, Ali Abbas Zafar who has shared the sneak peek of the most anticipated movie, again. Ali Abbas Zafar, shared a post on his Twitter handle, “Bharat in oil fields #middle east @Bharat_TheFilm, picture by dop Marchin..” 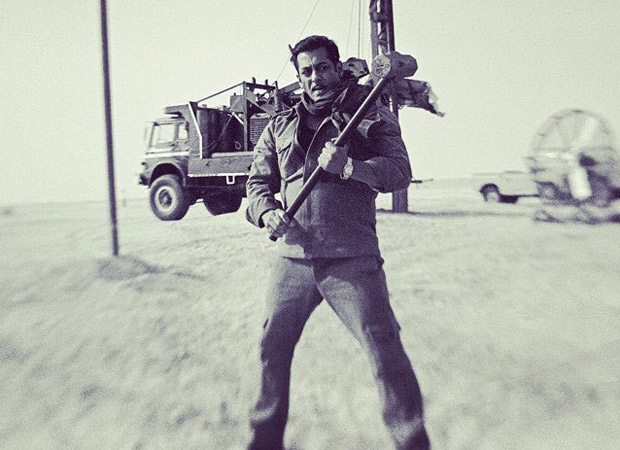 In the tweet, the actor is seen donning a jacket and a pair of jeans with a rugged look to keep the audience wanting for more before the release. The actor is seen casting an intense stare and a strong physical appearance by holding a hammer in the picture.

After seeing this post, the fans cannot contain their excitement and are falling short of words to appreciate the actor’s look! The Salman Khan – Ali Abbas Zafar pair would be seen working together for the third time, after giving hits like Sultan and Tiger Zinda Hain in the past. In the upcoming movie, Bharat, Salman Khan will be seen giving his fans a visual treat by taking them on a ride through six phases of his life, spanning six decades which denote the actor’s triumphs and struggles. The movie is based on the genre of a historical drama depicting the Partition of India and the events followed after the same. After seeing the movie’s trailer and songs, the fans have gone gaga over Salman Khan and cannot wait anymore to appreciate the actor’s stellar performance on the big screen.