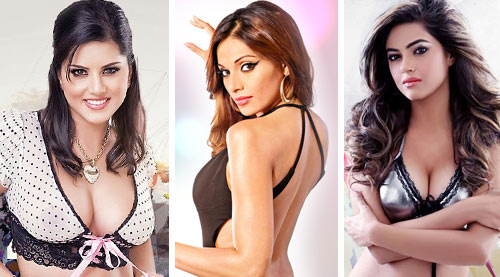 'Katra' is playing all over and really, it has to be clearly the hottest song of the year when it comes to visuals. Ok, so Sunny Leone's 'Baby Doll' is in close contention as well and between the two of these, there is a close call for sure. Still, the fact remains that as an industry; Bollywood is opening up much better than ever before and thankfully the three letter word SEX is finally coming out of the closet, and rather quickly, with the promise of much more awareness, excitement and articulation, sans anything vulgar, cheap or down-market, in the offering.

A thought which is pretty much gets a nod of agreement from newbie Meera Chopra also who is slowly, but steadily finding her way into Bollywood. She says, "I am of the same viewpoint personally but then I don't judge people who do it because at the end of the day, it's about your own rules and principles and what you feel happy about."

Now she has a point here as till about a couple of years back, before Sunny Leone had entered the scene with Jism 2, there were certain rules and principles which were pretty much written with a code of conduct hanging large. With Bhatts backing her up fully and Pooja Bhatt showing how with good aesthetics in place even adult entertainment could be shown classily without making audience cringe in their seats, Sunny Leone soon graduated from online to mainstream entertainment, hence bringing in a revolution of sorts in Bollywood. Ekta Kapoor mixed horror with sex, and the outcome was horrex affair Ragini MMS 2.

Says Bhushan Patel, who directed Sunny Leone in Ragini MMS 2, "Bollywood has already turned bold hasn't it? One has to see my last film to know that! And I don't see why it shouldn't? Like you say, if done aesthetically, it will never raise eyebrows. And nowadays, I feel, the audiences also are more casual towards physicality than ever before. They would rather see two adults kissing instead of two roses meeting!"

Now while it is understandable, the filmmakers are being responsible too and are making sure to stay away from sleaze and instead bring things the way they need to be without going overboard or unprofessional.

"If shot sensually or with humor, sex is no longer a taboo! In fact it's a money spinner at the box office! My Mastizaade combines oomph and fun as Sunny Leone is going to be sexy and hilarious! At the end of the day only public is important and public wants naughty Masti," quips Milap Zaveri, who has made a killing with his bindaas attitude and presentation when it comes to sex comedies.

No wonder, even though she hasn't really gone the whole hog when it comes to skin show, relative newcomer Vishakha Singh knows that she is a young woman of today who is comfortable with her skin and has a mind of her own.

She says, "Films have always been a reflection of society. PDA are common place in metros. I wouldn't say it's becoming bolder, I would say it's becoming more open. There is no hullabaloo about it anymore. Even as actresses, we realize what is important to a script and character and go ahead with it. Besides, heroines are no longer coy on or off screen. Personally, I don't believe in unnecessary smooch scenes and love making sequences just for the heck off it or to prove that I can be bold. There's got to be a damn good reason for me to be intimate on screen."

Many out there do believe that there are ample reasons for that, and hence more and more bold content is pretty much for the taking with filmmakers trying to churn out content that fits in well into the demand and supply mode.

"Watching bold content on a large screen is going to get the audiences in, irrespective of the cast and hence therein lays the pot of gold. So Bollywood is all set to turn bolder," says filmmaker Siddhartha M Jain who is making a film titled Saxx Ki Dukaan with Vir Das in a double role, "Also actors and filmmakers are slowly shedding their inhibitions. Everyone wants to entice the audiences with bolder content, especially when not all films can have big film stars in their movies."

Newcomers pretty much realize that as well and that was pretty much demonstrated by Sasha Agha who started her Bollywood sojourn with a bikini stint in her debut affair Aurangzeb.

"I think it all depends on the makers. While on one side there are some of them who have justification for the characters to be intimate on screen, then there are others who bring in sexual content for cheesy reasons so to try and promote only on that basis. It is not done; you can't have an actress strip down when it isn't required," says Sasha, "After all, a good film will always be a good film even if it has a kiss or love making scene, because that would be justified in there."

Now that's something which adds on to the confidence of first time director Jasmine D'Souza who has not just managed to declare the title of her first film as One Night Stand, but is also making sure that along with the sexuality quotient of her leading lady Sunny Leone, she can bring a controversial subject like this in mainstream cinema as well.

"Are we still making a big deal about 'bold finally coming out of the closet'," she questions, "I think a woman has always been in control of what she wants to do with her body and not be judged for the choices she makes. Last I remember, the debate had ended a long time ago."

Guess that should settle it once for and all!