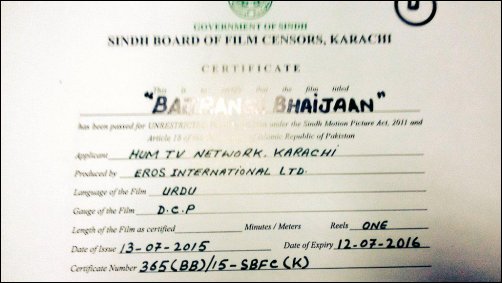 Salman Khan's Bajrangi Bhaijaan has been gaining momentum and how. Now we hear that the film that is set to hit screens this Friday will also be releasing across the border in Pakistan. In fact Fakhr-e-Alam, a singer-turned-businessman, and now, the new chairman of the Pakistani Censor Board, tweeted about the film's certification.


Posting an image of the censor certificate from the Sindh Board of Film Certification, Karachi, Alam added, "Also previewed & certified Bajrangi Bhaijaan & for the record it is not a negative or anti Pakistan film." Further talking about the film, Alam says, "In fact Bajrangi Bhaijaan is the most positive film for Pakistan that bollywood has produced in a long time. Totally unexpected." Though the film has received its certification, there have been a few cuts in the film.


As for the film itself, Bajrangi Bhaijaan that also features Kareena Kapoor Khan and Nawazuddin Siddiqui is directed by Kabir Khan. The film narrates the story of a Hindu man on a mission to take a young Pakistani girl, who is deaf and mute, back to her country, chronicling the adventures and experiences he stumbles upon during his road trip.