The 75th British Academy of Film and Television Arts (BAFTA) took place on 11th April at the Royal Albert Hall in London, United Kingdom. While award ceremony was virtual event, the presenters arrived at the venue to honour the big winners of the night. BAFTA took place in a socially distant fashion but all the celebrities aced their fashion game! 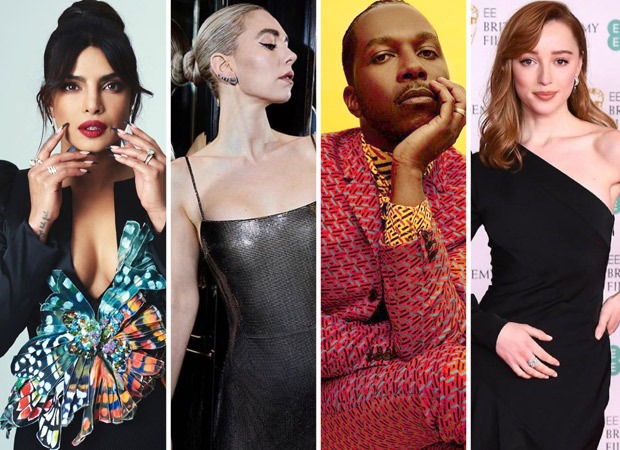 Here are some of the best-dressed celebrities of the night.

PRIYANKA CHOPRA
The actress wore two outfits for the occasion but one definitely stood out. Priyanka Chopra kept it elegant in a silk mikado jacket with hand-painted, beaded, and pleated butterflies and plissé skirt by designer Ronald van der Kemp. She kept her hair tied in a ponytail with balloon pleats. Going for signature dark lips, she opted for minimal makeup with slight peach eyeshadow. She wore Bulgari rings and earrings with Stuart Weizman heels to complete the look.

ASHKEY MADEKWE
The actress stunned in a yellow halter-neck gown with cuts on the waist and a flared bottom. With dewy makeup and the perfect winged liner, her hair in a tight braid, she made a statement. She wore a custom, Louis Vuitton, for the evening!

FELICITY JONES
Felicity Jones made all heads turn in an off-shoulder black embellished number from Maison Valentino. She added minimal jewellery from Cartier. Fresh makeup, wavy hair and minimal styling made this look a winner!

ROSE BYRNE
Rose Byrne made jaws drop in a black pantsuit from Miu Miu. She styled a black cropped 90s style blazer with a straight fit, high waisted pants and a waistband. She looked absolutely fire and boss lady 101 in this glittery black number!

LESLIE ODOM JR
Leslie Odom donned two classy Versace look for the event. From a printed burgundy suit with a yellow shirt to a blue suit with a deep red trench and blue and red polo, his looks were impressive and colour contrasting best! He was the first man to wear Versace Fall/Winter 2021 collection.

ANNA KENDRICK
Anna Kendrick showed off her long legs in a thigh-high slit dress from Zuhair Murad. The red, silver, a burgundy pleated number made her look like a mermaid! With soft makeup, hair swept on one side and pointy heels, her look was one of the favourites.

TOM HIDDLESTON
Tom Hiddleston looked like a charming prince in a black Ralph Lauren creation. The tailor-made suit fit him like a glove as he topped the look off with a black bow tie. He kept it classy with his hair swept back in a neat way.

PEDRO PASCAL
Pedro Pascal kept it sharp in a black Prada suit with a long A-line blazer and perfectly tailored pants. He was dressed to impress! He kept slight stubble and his hair was messy perfection!

VANESSA KIRBY
The Crown star Vanessa Kirby pulled of the modernized silver look! The silver Versace dress made her look absolutely striking with each curve defined to its very best! With soft makeup and her hair pulled back in a neat low bun, she added the much-needed drama with her winged eyeliner!

GUGU MBATHA RAW
Gugu Mbatha Raw chose an all Louis Vuitton look for the evening! The silver embellished dress looked regal with a yolk neck! She opted for a burgundy lip and soft makeup with nearly styled hair.

PHONE DYNEVOR
The Bridgerton breakout star Pheobe stunned in a black one-shoulder Louis Vuitton number and impressed everyone with her style in the figure-hugging dress with hued makeup and her hair swept on the side in soft curls.

These are our BAFTA favourites! Let us know which look gave you major fashion goals!