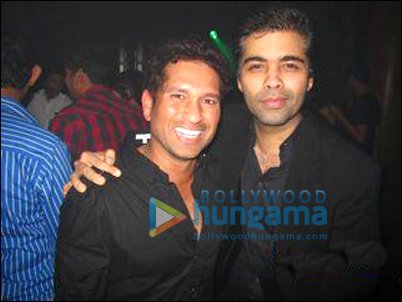 The euphoria following the World Cup victory is hard to describe in words. Right from the common man to high profile celebrities, all are still busy celebrating Team India's success in their own sweet way.

The 'Men In Blue' too have been partying hard ever since they bagged the Cup that Counts. 'Master Blaster'- Sachin Tendulkar, for whom it has been a life-long dream that has finally been accomplished, too had a bash for his close friends. The bash, organised by restaurateur Sanjay Narang, saw a lot of B-town celebs in attendance.

For a change, the B-town stars themselves turned into star-struck fans as they waited for an opportunity to pose with Sachin Tendulkar.

KJo posted his pic with Sachin on Twitter and said, "Had to tweet this!!! My big moment with the legend of all legends!!!"

Shahid Kapoor too was all starry eyed when he came to face with the God of Cricket. The actor tweeted, "What a man!!!!! Privileged to be by his side!!"

Eesha Koppikhar too only had words of praise for the Little Master. The actress tweeted, "What a moment to pose with you. Team India n u have made us proud."