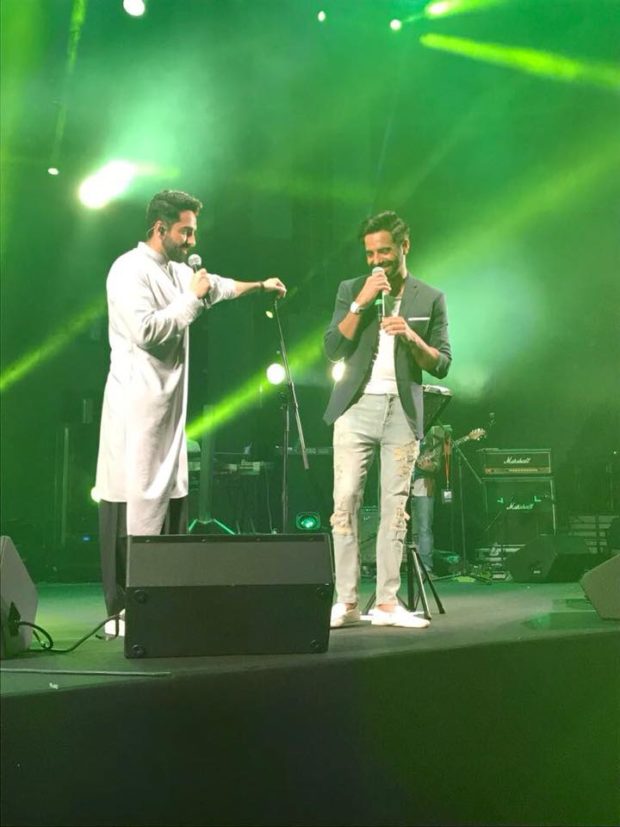 He played a quintessential Punjabi munda in Vicky Donor. Well, even though his suave attitude has earned Ayushmann Khurrana his share of female fan following, the essence of being a Punjabi has always remained with him. And he is quite proud of it. He flaunted the same along with sibling Aparshakti Khurrana during their recent gig in Dubai.

Ayushmann Khurrana was a part of a concert that was organized at the Dubai Duty Free Tennis Stadium on Friday, October 27 as a part of the MTV Unplugged Live show. His opening act of the night turned out to be a grand success, what with Ayushmann entertaining the audience not only with his music skills but also dancing skills. The actor along with his brother, who is also an actor and host, Aparshakti came together on stage to flaunt some amazing Bhangra moves that left the audience enthralled.

The two actors grooved to one of Ayushmann’s popular chartbuster ‘Rum Whisky’ from his debut film Vicky Donor. The actor sang the peppy track and also performed on it. Captioning the video saying, “When your sibling goes berserk with you onstage. Aparshakti Khurana #dubai #gig,” Ayushmann posted the video of the two of them dancing on stage on the social networking platform.

Besides this number, reportedly, Ayushmann Khurrana sang many of his famous tracks which include ‘Hookah Marda Phira’, ‘Mitti Di Khusbhu’, ‘Haareya’ and also his all-time chartbuster ‘Paani Da Rang’.

Also, it featured Pakistani singer-actor Ali Zafar who too performed on the same night for the same show as he left the audience mesmerized with some of his groove-worthy hits.