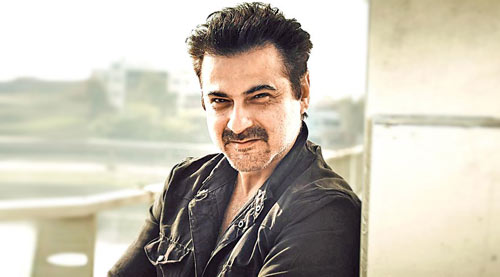 If Sanjay Kapoor is mighty excited about the release of his debut production Tevar, he is pretty much showing it. Continuing the legacy of no-expense-spared productions by his elder brother Boney Kapoor, even Sanjay has gone ahead and shot Tevar with Arjun Kapoor, Sonakshi Sinha and Manoj Bajpayee in a massive way. As a matter of fact, this could well be the biggest of them all when it comes to a film being set in rustic India.

The film is first major release of 2015. You must be anxious.

Sometimes everything falls into place, and Tevar is one such film. Not many are aware that it was meant to be Arjun's debut film; we thought of shooting it before Ishaqzaade. However that didn't happen and Arjun moved ahead in his career. While Tevar was taking shape, Arjun's Gunday and 2 States worked well for him. Also, Sonakshi and Manoj add a lot to the film. We also have good music. The film has been shown to a few and from whatever positive reactions and feedback I am getting, I feel that in spite of a commercial set up, it looks very aesthetic. Tevar is not commercially corny there is a fresh element to it.

Yes, the locations, scale and setting are pretty much standing out in a big way.

I will tell you something, people have a notion that a film can look grand only if shoot it in Los Angeles or New York. We have broken that myth by shooting the film in Agra and Mathura, and still made it look big. It is the way you present your film that boasts of good grandeur. In this is where the effort of director, cameraman and the whole team comes in.

Somewhere in the corner of your heart you also wanted to gift your 'bhatija' Arjun a major film, right?

If I would not have made this film and someone else would have been making it, for them also Arjun would have been the best choice as his presence, height and personality suit the Title 'Tevar'. He is just right for this genre of roles as he fits in that young boy look with a body language to match. Arjun has been appreciated in all his films but after Tevar his whole persona is going to change; he is that good in the film. When I was watching the shooting, I was in shock to see him do everything so well, be it action, drama or emotional scenes.

You know, Sonakshi has never been tapped right as an actress. Though she has done many commercial big budget films and that too with a great starcast, she has never played a young girl. Arjun and she make a good pair, also because they both are tall. Moreover, with her losing weight, she is looking stunning. She has also performed very well. Other than action, there is a lot of story element and romance in there; this is where the chemistry between her and Arjun comes across as really striking.