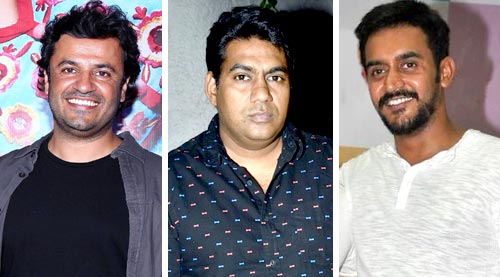 "We have not actually gone down on the streets to protest trying to support somebody from the fraternity," said Sabbir Khan in the Bollywood Hungama's exclusive Director's Special 2014 Video interview with Faridoon Shahryar (FS). Vikas Bahl, Omung Kumar and Shashank Khaitan were the other panelists and the spoke about a wide section of pertinent issues bothering Bollywood. "We have made ourselves sitting duck. I am sure that there are people in the industry who get happy when the collections of a film come down following the protests," Vikas Bahl said about the unjustified protests/call for ban against films that keep on happening with an alarming regularity. "You can show a bikini but not a bra, that's the irony," said Shashank Khaitan about the request by the Censor Board to blur the bra in Queen." For my film Mary Kom, they (Censor Board) told me to edit out a certain scene or else kids as young as 5 can have nightmares," revealed Omung Kumar. We bring some exclusive excerpts from our Director's Special 2014 interview. The views shared here must be read by the entire industry for a better tomorrow.

FS: Vishal Bhardwaj had a very interesting column in The Times Of India on Sunday January 4, 2015 where he made it clear that he was upset with the fact that the politicians and even people look at film personalities as 'naachne gaane waale'. And filmmakers generally are not expected to have a political opinion. The sort of resistance and opinion that we saw for PK or Haider has proved that filmmakers are sitting ducks. How do you look at this situation?

Vikas Bahl: We have made ourselves sitting duck. I am sure that there are people in the industry who get happy when the collections of a film come down following the protests. However, we filmmakers are so opinionated. The whole country looks up to what we have to say. They spend their weekends and half their salaries on watching our films.

Sabbir Khan: We have not actually gone down on the streets to protest trying to support somebody from the fraternity.

Vikas Bahl: Nobody has ever gone to the Prime Minister with the list of our demands. And if we do it, I am sure it's going to stop. Everyone who is protesting has their own agenda. Some lawyer wants publicity in his small town. Some politician is looking for an opportunity. They are just looking for some form of publicity. We are exposed to them because no one is standing up for us. And we are not standing for ourselves. In fact, our industry is facing hundred other issues only because we don't stand up together.


FS: In fact, Aamir Khan had recently commented that there is lack of unity in Bollywood. Down South, the scenario is different as the filmmakers out there are quite united. Even in case of PK and Haider, very few people actually came out to show their support. Vishal Bhardwaj now moves around with a security guard. Even Aamir and Rajkumar Hirani will be having a tough time in trying to protect themselves...

Sabbir Khan: If tomorrow somebody decided to help or support, what can they do? You have no idea. You can just call Vishal and say that you feel sorry.

Vikas Bahl: Somebody somewhere files a PIL by paying Rs 1000 and hiring a lawyer. Some journalist decides that it's a great story. So that guy filing PIL gets its publicity. The poor director is trying to figure out what to do because that's nothing that protects him. The Censor Board, half of the time, is in fact struggling trying to guess what kind of protests can come up.

FS: In fact I believe the Censor Board had warned you that there can be repercussions with regards to the Muslim prostitute shown in Queen...

Vikas Bahl: They were only trying to protect me. But who would have protected me if that thing had turned into a big issue? But I told the Censor guys not to worry about me and that I'll handle myself. So ideally if the Censor Board clears something, nobody should be able to stand up and cause problems.

FS: The Supreme Court made a very strong point regarding PK by dismissing all the charges against the film and made it clear that if anybody has objections, they should not see it. But this decision was not really celebrated in the industry.

Shashank Khaitan: The sad part is that the Supreme Court has to say it because as a democracy, that's our fundamental right. The only thing that the democracy is based on is tolerance. Half the times, we are battling with things like there were issues that I dealt for my film Humpty Sharma Ki Dulhania that I can't even mention. And I am laughing my a** off, thinking that, is that even an issue?

FS: After Aarakshan, the Supreme Court passed an order that once a film gets passed by the Censor Board, no state government can ban it. But I guess these directives just fizzle out...

Vikas Bahl: But most decisions in our industry fizzle out...

FS: Talking about censorship, in Queen, a scene of bra was blurred. I informed Anurag Kashyap about the same in Sri Lanka on Bombay Velvet sets. He was not aware of it and got very angry when he found out! It was a very innocuous scene and blurring it was totally unjustified. Even the anti-smoking disclaimer has been widely criticized.

Sabbir Khan: It becomes all the more prominent by blurring it!

Vikas Bahl: What I believe is that the Censor Board people are trying their best to clear a film. They, like us, are unaware as to what all can happen with a particular scene in a film. When they raised eyebrows over the bra scene, I told them it's just a woman's banyan! What's the problem with a bra? It's not a part of a woman's body. If I put a male banyan out there, is it Ok? But they argued that I can't show a bra. I couldn't understand the discussion. I wondered who thinks that showing bra is perverted.

Shashank Khaitan: But you can show a bikini! That's the whole irony.

Sabbir Khan: I wonder why we don't have a 'PG' or 'R' rating. We have been saying that for years but nobody is listening.

FS: Do you feel that films of bigger stars get away with certain scenes and that the Censor tends to be harsher on smaller films...

Oumung Kumar: Not at all. Which film is shown to them, the Censor guys would tell you that 'this particular scene should be removed; then it's ok'. For my film Mary Kom, they told me to edit out a certain scene or else kids as young as 5 can have nightmares! So I did the needful. Obviously, they were thinking on a broader level. But they should not tamper the film. So edit a little stuff that they are happy and then they pass the film! I wanted a 'U' certificate for Mary Kom so that it can get tax-free status.