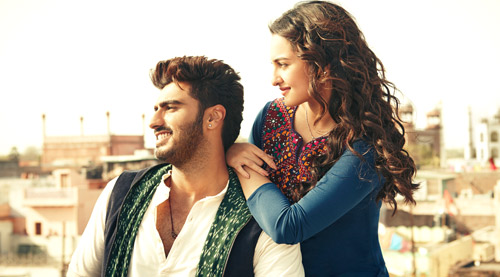 Funny, how more things change the more they remain the same. Tevar which is one of the most engaging masala dossiers in recent months takes us through the crowded gallis mohallas and akhadas of Agra and Mathura in search of that elusive thing called love.


This is a love story where most of the playing-time is devoted to the protagonists locked in a scuffle of the most physical and violent kind. And yet, there is a core of tenderness in the film manifested in Sonakshi Sinha's melting pleading eyes as she makes a run away from the city's arch-goon Gajender Singh (Manoj Bajpai, bang-on ) who has taken a shine to her.


Mind you, it's not a lecher's lascivious love. It's true love.


Bajpai interprets the besotted goon's character with such intuitive warmth you almost feel sorry for this vicious uncouth katta-carrying ruffian turning into jelly when love strikes at a dance performance which incidentally could've been better choreographed.


Never mind. There is no telling about tastes, especially when a man loses his heart while the local lass swirls twirls and unfurls a wave of endless violence that ends at Terminal 3 of the Delhi airport.


Bajpai's character's love for the spirited Radhika would have made for a more interesting case-study on the wayward ways of the heart than the other liaison between the hero and the heroine. As the love-smitten sociopath Bajpai instills inner reserves of wicked unexpectedness in scenes that seem to be written to accentuate the demoniacal duffer's embarrassing attempts to be romantic. Bajpai takes the character beyond the precincts of parodic evil.


At the end of the day Tevar is a showcase for Arjun Kapoor's heroics, so much so that the hero's friends-so much an integral part of the mofussil drama with Salman Khan in Tere Naam or Tusshar Kapoor in Mujhe Kuch Kehna Hai-are reduced to a babbling blur. Make no mistake this is Arjun Kapoor's one-way ticket to some kickass hero-giri. And would Mahesh Babu please move over?


Indeed, the film offers him the chance to take his substantial stardom to the next level. Arjun grabs the opportunity with both hands. From his stunning introductory sequence where he makes his way into a kabbaddi match by indulging in some earthy parkour to the climactic fist-to-fight with Bajpai, Arjun doesn't let go of even a moment of the opportunity to juice his character for all the adrenaline that it is worth.


A film about characters on the run stands the risk of running out of breath. Tevar averts the wheezy and adopts the breezy momentum of a narrative hurling towards a pre-empted bloody finale .Oh yes, the film is violent. Extremely so. But it is not the sickening life-sucking violence of Ghajini or the recent Lakshmi. The action scenes, though stretched out, are shot skillfully in the comic book mode. You could almost see debutant director Amit Sharma thinking of the original fights in the Telugu hit Okkudi being here reproduced in tactile terms.

The narrative is pickled with crackerjack action sequences. And if Arjun is the self-confessed 'Salman ka fan' hero of Tevar then action director Sham Kaushal's kicks and grunts are the hero's hefty heroic ammunition.


The supporting cast is sketchy at the most with Deepti Naval trying bravely to paint shades into her shadowy character. But it's the redoubtable Raj Babbar who springs a surprise. Playing the wastrel hero's upright cop-dad Babbar succeeds in swerving his stereotypical character into unexpected areas of empathy.


In fact Babbar's character epitomizes the film's mood. We've seen the same plot a million times. Tevar makes the familiar look fresh and engaging. If 2014 ended with a bang called PK, 2015 if off to a flying start with this bumpy joyride of a film, a cat-and-mouse chase film with smartly written scenes that leave us hankering for more.


In the film Sonakshi's character is shown to remove all the matar from the paneer whenever she is served the dish. But we don't mind taking the corny dialogues which come with the captivating scenes. Director Amit Sharma takes a very basic plot of a small-town boy on the run with a hapless girl whom the city's biggest goon wants to forcibly marry. This isn't the first time that Sonakshi Sinha has played the damsel in distress. She knows the character by heart. In a couple of sequences-such as the one where Arjun smears holi colours on her face and or the pre-climactic interlude where he attacks Bajpai with the arsenic of sarcasm-Sonakshi nails the character. This is her best performance after Lootera.


Luckily for the script, Arjun and Sonakshi look like the kind of people who can bump into one another due to a bizarre chain of events, and then fall in love. The build-up to the couple's growing mutual fondness doesn't have a convincing graph. But what the film has in huge amounts is inner faith in the filmy formula and a virile fluency in the narrative pattern.


And yes, the payoff is ample. Shot exquisitely in Agra and Mathura by cinematographer Laxman Utekar, Tevar conveys that coarse on-the-edge feeling of a town constantly ready to erupt into bouts of violence but saved from catastrophe by bouts of humour.


This week, just forget about Gods and aliens. Just go have a good time watching an unpretentious unapologetic masala film.