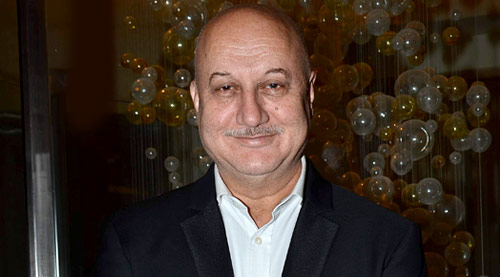 Anupam Kher is a lucky mascot for many filmmakers. For a very long time, Yash Chopra couldn't dream of making a film without him.

The same is true of Sooraj Barjatya. And now, Sooraj has decided never to make a film without Anupam.

Says a source close to the Barjatya production house, "Barring Sooraj's first film Maine Pyar Kiya, Anupam has been a part of all of Barjatya's blockbusters. Anupam was not in Soorajji's Main Prem Ki Deewani Hoon. And we all know what happened to that. Anupamji has been an integral part of all three blockbusters of Soorajji's career-Hum Aapke Hain Koun, Hum Saath Saath Hain and Vivaah."

And now, the god-fearing superstitious director has decided to not direct any film without Anupam playing a role.

Anupam gets emotional while speaking of the Barjatayas, "If it wasn't for them, I wouldn't be here. The Barjatyas had the faith to cast me as a 60-year old man when I was in my 20s in Saaraansh."

Adds Anupam, "Working with Soorajji is like creating history without feeling self-important about it. He is so humble and gracious; an actor feels he must deliver his best to a director who demands nothing. I've been associated with the biggest films of Soorajji. I know Prem Ratan Dhan Payo will be as monumental as Hum Aapke Hain Koun, Hum Saath Saath Hain and Vivaah."