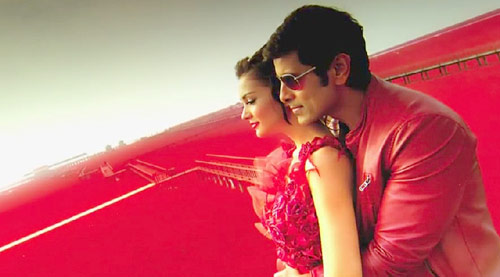 Let me tell you about an actor called Vikram. In I, which is actually the most exceptional film of the high-maintenance, director Shankar's extravagant oeuvre, this exceptional actor, known to transform into whatever he plays, stands in a room filled with multi-reflective mirrors,looking at his horribly deformed body and disfigured face.

It is a moment that would be quoted as an example of what magic a capable actor can create out of melodrama.

Melodrama is certainly Shankar's forte. His films are not only many sizes larger than life, they are also suffused in excessive exuberance and free-flowing rhetorics that do not render themselves to a proper Hindi translation.
In I, one doesn't mind the blizzard of bombast and drama. This is Shankar's most dramatic film to date. Drama has never been a rationed component in his cinema. Here the director known for his visual flair and vital connect with the masses, pulls out all stops, as he takes us on a colloquial and spectacular visual discourse on the subject of physical beauty and its impact on love.

Do we stop loving a person if he or she becomes physically undesirable? Films like Rajnish Behl's Soorat Aur Seerat and Raj Kapoor's Satyam Shivam Sundaram dealt with the theme of love and physical beauty with varying degrees of effectuality.

In I, Shankar, with his extraordinary command over the grammar of the narrative's rapid run, goes for the jugular.The film clocks at 3 hours and a few minutes. Some of it is cheap cheesy window dressing...The kind that a spectacular film must indulge in to ensureboxoffice returns.

There are cringe-worthy jokes about women's lingerie and vital statistics.At one point the hero's breast....sorry, best friend makes a dig at the heroine's 'headlights', and she isn't driving acar...not in a bikini! There is nothing subtle about the way the film's hero, a state-level wrestler filled witha boorish pride about his looks and physique, loses it all and becomes hunch backed and grotesque.


There is a lot of embarrassing humbug in the lengthy narration. With that penchant for overelaborate plotting whereby every component in the characterizations must be hammered in repeatedly, the film's moral map gets tediously fine-printed in the narrative. The caucus of villains, which oddly includes an expressionless Upen Patel anda cross-dresser who lusts after the hero and then wants him destroyed,gets its comeuppance with infuriating mathematical precision.

But here is the thing. I is nonetheless an exceptional film. The main love story between the disfigured hero and the stunning model (Amy,ably cast) gets its core of compulsion from The Beauty &The Beast fable. The manner, in which the relationship between the coarse wrestler and the classy model grows and then takes a twisted turn, is skillfully maneuvered by the director.

There is no doubt that Shankar is a remarkable raconteur. His cinema is almost always blessed witha leading man who takes the director'svision beyond the script. Here, Shankar has an arresting ally in Vikram whose interpretation of the protagonist's horrific physical change is so palpable as to make every other recent attempt at prosthetic-induced realism look strained.

The film's most majestic chunks are those where Vikram, playing the deformed avenger stalks dark dingy corridors and mohallahs in search of his tormentors. Here is where P.C. Sreeram's magic from behind the camera opens its arms and hugs excellence.

What we see on screen are visually interpreted themes on the destruction of human faith.

Vikram's courtship of the beautiful Ms. Jackson is taken through various stages of awkward self-assertion, each stage brilliantly covered and crossed by Vikram. As is the wont in Shankar's cinema the songs (A.R. Rahman) and choreography are breathtaking in their grandeur and eloquence.
Especially outstanding is the fantasy opera beautifully composed and choreographedwhere the Beauty is faced with the agonized helplessness of the Beast.

There are many sequences in I which linger in the mind long after the show. I only wish the narrative had avoided banal characters and long-drawn episodes of crass mass wooing where the film's innate excellence is mocked.

Shankar irons out the rough edges with his mesmerizing power to hold the character's bizarre fate in place. Indeed, the film takes us beyond the imaginable and the conceivable, fusing with fabulous flamboyance the fantasy elementwith a level of heightened reality that's commercial cinema's forte.

More brilliant than the film is Vikram's multi-personality performance which holds the film together, loopholes and all.Vikram embracesthe grotesque as possessively as the glorious.It doesn't matter which language you speak or think in. Just go for I. It speaks the language of cinema.