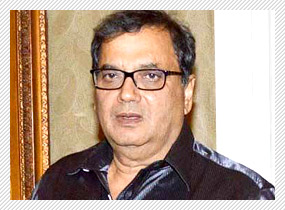 Sir, this letter was intended to be written a weekend after Kaanchi released. However, that was the time when your heartfelt blog came about how your films have traditionally been thrashed by critics and ultimately live a life of their own. Pronto it was decided to hold off the letter for a week at least with hopes that perhaps Kaanchi is meted with the same fate.

Perhaps it manages to find steady footfalls. Perhaps there is an audience base out there which sees things that majority of critics missed. Perhaps this does turn out to be your comeback affair at all.

Alas, that didn't happen and though that's sad indeed, in a way it is gladdening for a hardcore Subhash Ghai fan. Here are many reasons why!

Reputation: Sir, you are the man on whose films we have grown up on. Saudagar, Khalnayak, Ram Lakhan, Karma - these are films for which cinemascope was perhaps invented. If one wanted a larger than life affair, Subhash Ghai is the man whose doors were knocked.

Frankly, for most fans and followers out there, the Showman would rather be remembered for his better made films than anything like Kaanchi.

Men and drama: Sir, you are the man who has excelled time and again in bringing good wonderful dramatic encounters on screen. When Shah Rukh Khan takes on Amrish Puri in the climax of Pardes, there are goose bumps all around. When Anupam Kher is slapped, we remember 'thappad ki goonj'. When Mandhari Kaka screams 'Kahan Ho Tum Saudagar', the heart weeps.

When Kartik dies in Kaanchi, not a tear is shed.

Women: Sir, your leading ladies have traditionally been the highlight of your films. Madhuri Dixit, Manisha Koirala, Mahima Chaudhry, Simi Garewal - these women were actually major reasons to warrant a repeat viewing for your films. Even Taal stays on to be one of the better performed films by Aishwarya Rai. However, it appears to be a free fall from that point on, a result of which is rock bottom that has been hit with Mishti's annoying act in Kaanchi.

Sir, guess you were really hopeful of either nurturing her talent during the film's making or hoping that she would up her act dramatically all by herself.

Caricatures: Sir, the caricature characters created by you have traditionally been loved. Vikrant Kapoor, Chuniya Mama, Sir John, Bad Man, Roshi Mahanta were fun. No, really, seriously! Hence, there was hope when Rishi Kapoor was pitched as a playboy of sorts in Kaanchi.

The thought process was right; the characterization pretty much in your alley, but the end result was embarrassing to say the least.

Music: Sir, it would be sacrilege to even comment on some of the blockbuster music that your films boasted of for almost two decades. A man of your stature doesn't have to be reminded of that; after all, you have been a master in picking and choosing some of the greatest tunes made between Kalicharan and even much forgotten Kisna.

But what happened post that? Were you truly impressed with what your composers offered you for Kaanchi?

Energy: Sir, when Anil Kapoor takes on Amrish Puri in the court (Meri Jung), one feels the adrenalin rising. When Akshaye Khanna pursues Aishwarya Rai (Taal), one roots for him. When Mahima Chaudhary plays a 'gaon ki gori' (Pardes) with gay abandon, one feels like protecting her. When Ramya introduces Sanjay Dutt (Khalnayak), you want to be a bad boy yourself.

However, when Mishti decides to take revenge, it turns out to be a lifeless affair.

Vision: Sir, when it comes to reputation, men, drama, women, caricatures, music and energy, it was your vision which made it all possible. If not for you, all these ingredients wouldn't have come together to make for such a delectable dish. You have been the chef, cook and the server; the consumer is audience which expects a familiar dish on the table. Kaanchi isn't one such dish.

You are not one of those filmmakers from whom one expects reinvention; you are expected to be you. Just as was the case with Yash Chopra and now David Dhawan and Rakesh Roshan. These veterans are delivering just what is expected out of them. They are not shifting between the likes of Yaadein, Kisna, Black & White, Yuvvraaj or Kaanchi. Even if you remake Saudagar, it would be lapped up. Please don't let that vision go away forever.

Denial: Sir, the biggest hurt factor comes in when a filmmaker refuses to acknowledge that a product of his has actually been given a thumbs-down by majority who has seen it. Thankfully, you have been gracious enough to not be as scathing on critics as many of them have been to your film. Thank you, you didn't go the Ram Gopal Varma way after Ram Gopal Varma Ki Aag. You agree that people care for you, and that's heartening.

Now please cut yourself completely off Kaanchi and watch the film again after three months. You would know better than us how, where and why did things go wrong. And yes, it can be said with utmost positivity that the audience will get back Mr. Subhash Ghai that they always wanted.