Amitabh Bachchan and Shweta Bachchan Nanda have come together for the very first time on screen and the ad video is out now! It was surprising to see Shweta finally make her screen debut after so many decades and that too with her doting papa! The ad for a jewellery brand starts with her guiding Amitabh through a dusty, old government office granting pension to employees. They are heckled and pushed as Shweta guides her dad to the table of the concerned government official. It is endearing to see the father-daughter Jodi on screen and it gives us insight into their real-life equation as well. 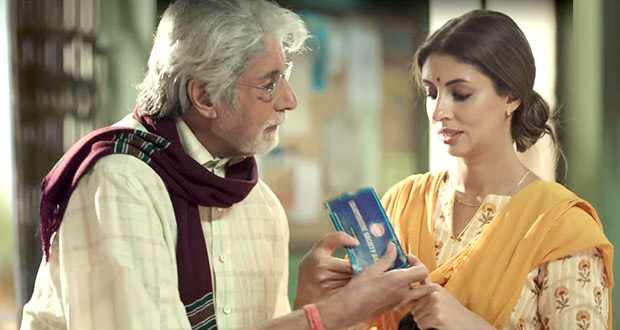 Amitabh took to Twitter to share how emotional he is to finally share frame with his daughter. He wrote, “Emotional moment for me .. tears welling up every time I see it .. daughters are the BEST !!”

Currently, Amitabh is holidaying with his daughter and son Abhishek Bachchan in Russia. They caught the semi-final and final matches of the FIFA World Cup in Russia and were then holidaying there. Yesterday, Amitabh shared a photo of him buried under a pile of blankets and compared himself to an ET in a hilarious post. He also shared pictures of his family chilling in a lounge before the game. Everyone including Shweta, Abhishek and grandkids Navya Naveli Nanda and Agastya Nanda were seen using their mobiles. Amitabh's caption read: Family which mobiles together, stays together.

On professional front, Amitabh will be seen in Ayan Mukherji's Brahmastra and Yash Raj Films’ Thugs Of Hindostan. His character details from both these films are kept under wraps. But he sure shared how happy he was to work with Ranbir Kapoor and Alia Bhatt. He shared anecdotes from their prep sessions together and was visibly impressed with Alia and Ranbir! His last film was 102 Not Out with Rishi Kapoor.