Alia Bhatt paid tribute to her Humpty Sharma Ki Dulhania co-star Sidharth Shukla, who died on Thursday. Sidharth, who made his Bollywood debut in 2014 with Varun Dhawan and Alia Bhatt's Humpty Sharma Ki Dulhania, died of a heart attack on Thursday. Alia shared a throwback monochrome photo of herself with Varun and Sidharth posing at a promotional event for their film on her Instagram story. 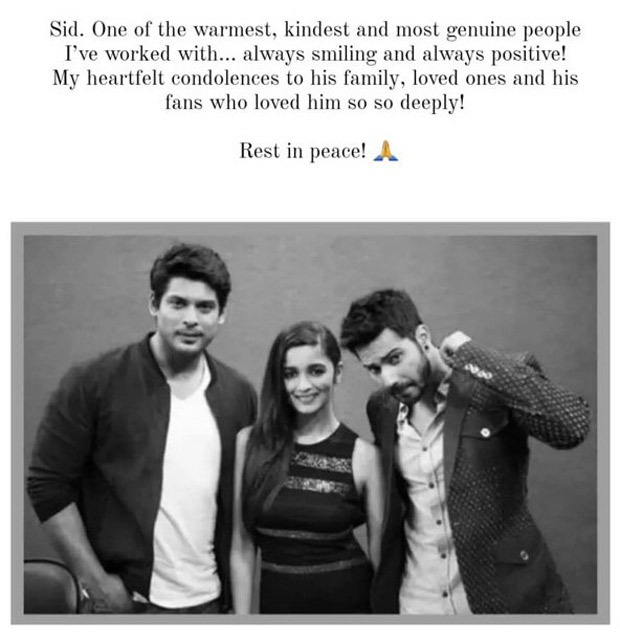 Alia Bhatt remembers Sidharth Shukla, says he was the most genuine person she worked with

Alongside the snap, she wrote, "Sid, one of the warmest, kindest and most genuine people I've worked with...always smiling and always positive! My heartfelt condolences to his family, loved ones and his fans who loved him so so deeply! Rest in peace!"

Varun Dhawan, the film's lead actor, had previously expressed his sorrow over Sidharth's untimely death."Rip brother u are loved by so many and u touched so many with ur kind heart and beautiful personality. Today heaven has gained a star and we have lost one. My deepest condolences to the family and loved ones," Varun wrote on his Official Instagram handle.

He was taken dead to the hospital about 9:25 a.m. on Thursday, according to one of the hospital employees. However, the actual cause of his death has yet to be revealed. Sidharth died after a heart attack, according to many accounts.

He most recently achieved fame as the winner of the reality show Bigg Boss 13. The actor's most recent appearance on film was in Ekta Kapoor's wildly popular drama Broken But Beautiful 3, in which he played Agastya.

Also Read: Sidharth Shukla was not keen on Bollywood