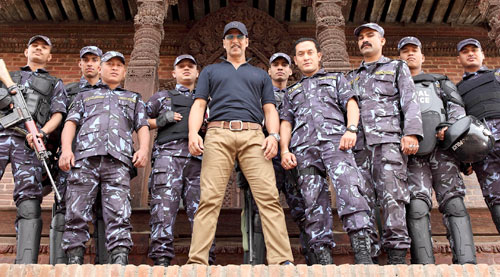 No film from Bollywood has enjoyed a feat like this, especially since the onset of social media. However, Baby has managed that. In the news ever since it was announced, Baby has been generating excitement for all the right reasons. Now it has taken the buzz to an altogether different level, what with the topic 'Waiting for BABY Trailer' trending for a fortnight.

Informs a film and web enthusiast, "Nothing like this has been witnessed before. Ever since Akshay Kumar was seen in his most special appearance for The Shaukeens, his fans have become terribly impatient about seeing him as a central lead. Baby was anyways hot, considering the fact that it has Akshay and Neeraj Pandey returning after Special 26. With a few stills from the film in circulation already, it was about time that Baby was seen in a much larger manner."

No wonder, with quite a lot of secrecy around the actual plot, space and setting of the film, the intrigue factor was only growing further. This is when the idea of 'Waiting for BABY Trailer' came into being. What started off as a routine call from the fans turned into a full blow online movement with daily records being created around the trending.

"Yes, it is now 14 days and the topic is still trending amongst the Top-10," the enthusiast adds, "In fact moved by request from his fans and followers, Akshay even released a quick-fire teaser which had quite a few shots captured from the making of the film. However, audience is still waiting to be satiated. Akshay has promised that the trailer would be out next week on December 3."

Now that's something to really look forward to, considering the fact that Baby is an out and out action-drama-thriller with a good mix of cast in the form of Rana Daggubati, Taapsee Pannu, Anupam Kher and Danny Denzongpa.

With the film set for January 23 release, a 50 day plan is being put together in motion now.