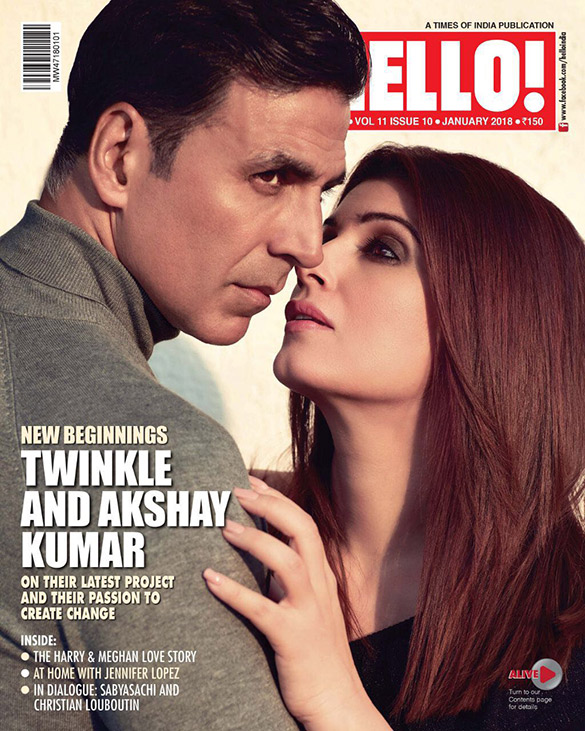 It is often said that opposites attract and it really holds true for Akshay Kumar and her wife Twinkle Khanna. Both are quite different when it comes to their upbringing, outlook towards life, sense of humour, business sense and even in terms of political views. Yet, they are happily married and going strong.

And now, they have featured together on the January 2018 issue of Hello magazine and it’s something to watch out for. The picture features Akshay Kumar looking away while Twinkle Khanna looking at her dashing hubby seductively. Both look great and their choice of clothes are also praiseworthy. But Twinkle Khanna takes the cake with her expressions, hair and beauty. In fact, one wonders why she’s not acting anymore as she could surely give a lot of actresses a run for their money! The tagline reads ‘New beginnings’ which is apt since the couple has produced a film, Pad Man, which releases in this month itself. The film is inspired from Twinkle Khanna’s second book ‘The Legend Of Lakshmi Prasad’ which in turn is inspired by the life of Arunachalam Muruganantham, who sparked a revolution by creating low-cost sanitary napkins. This is the first film produced by Twinkle under her banner Mrs Funnybones Movies.

Akshay Kumar had a rocking 2017 and is meanwhile looking forward to fireworks in 2018. Pad Man releases on Republic Day followed by Gold, also based on a true story. It is directed by Reema Kagti and shall release on Independence Day. He’ll then began filming for the historical action drama Kesari, produced by Karan Johar followed by another real-life story Mogul, based on T-Series founder Gulshan Kumar. Finally, he’s also expected to kick-start Housefull 4, which will release on Diwali 2019.