In Rohit Shetty’s next Sooryavanshi, starring Akshay Kumar and Katrina Kaif there will be a power-packed climax as Ajay Devgn and Ranveer Singh joined the cast. Rohit Shetty’s cop universe also includes Ajay Devgn’s Bajirao Singham and Ranveer Singh’s Simmba act. The team of Sooryavanshi is currently in Hyderabad to shoot the climax sequence.  A massive set has been constructed in Ramoji Film City for the shoot. Reportedly, Singham, Simmba, and Sooryavanshi will be teaming up to fight a larger than life situation. 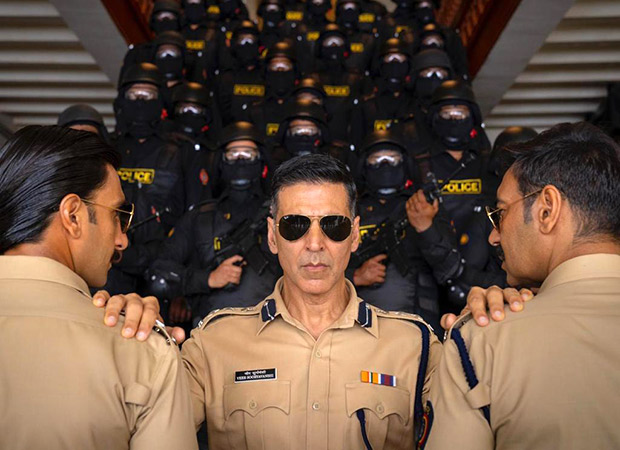 Akshay Kumar, who plays Veer Sooryavanshi in the film, took to his social media handle to share a still from the film featuring him along with Ajay and Ranveer. He wrote, “The desi Avengers of the Cop universe! When Bajirao ‘Singham’ meets Sangram ‘Simmba’ Bhalerao meets Veer #Sooryavanshi, expect not just fireworks but a full-blown blast on 27th March 2020."

Produced by Rohit, Karan Johar, Akshay, and Shibasish Sarkar, the film also marks a reunion for Akshay and Katrina Kaif almost a decade after Tees Maar Khan. There are multiple antagonists, including Nikitin Dheer, Gulshan Grover and Abhimanyu Singh as the film is set against the backdrop of terrorism in India. The film is scheduled to release on March 27, 2020.

Also Read: Katrina Kaif posts a picture from the sets of Sooryavanshi and we’re excited!