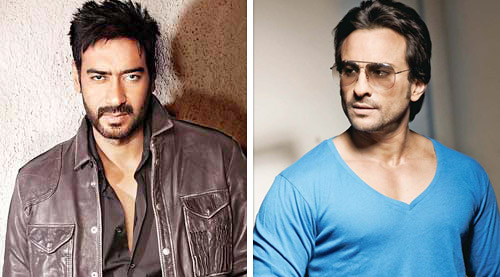 Ajay Devgn's Action Jackson was supposed to release on November 7. Now it has been moved ahead by a month to December 5.

Saif Ali Khan's Happy Ending was slated for November 28 release. It has been now been advanced by a week, and would arrive on November 21.

Result? A change in Bollywood equation for many other biggies. Here is a quick look:

• The Shaukeens has now moved from November 21 to November 7. It would continue to enjoy a solo release for itself and would arrive a fortnight after Happy New Year (October 24) when audience would be thirsting for a new film

• Happy Ending would now have a fortnight open for itself as currently there is no release planned for November 28. This should well be a 'happy ending' indeed

• Action Jackson would throw a spanner in the plans of All Is Well which is slated for release on December 5. It is going to be Bol Bachchan clash of Ajay Devgn v/s Abhishek Bachchan now

• Meanwhile Ungli, which has been delayed by over a year, is currently slated for December 5 release. It is highly unlikely that the Emraan Hashmi starrer would opt for a three way clash with Action Jackson and All Is Well

• As for PK, it continues to enjoy a monopoly of a remarkable three weeks as after its arrival on December 19, the next two releases Tevar and Alone would arrive way down on January 9