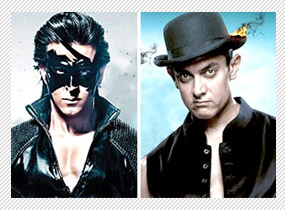 Till a fortnight ago, the ones who were fighting for supremacy as far as setting, creating and destroying box office records at the top were the three Khans. However with Hrithik joining the club, literally so, with a quick-fire 200 crore success of Krrish 3 (and still counting), the man who is next in line and all set to take up the challenge is Aamir Khan.

"The next big release is Aamir Khan's Dhoom 3 and the ball is in his court to ensure that the records created by Hrithik are surpassed," comments an insider, "He has to score bigger than Krrish 3 with his Dhoom 3 on opening day, opening weekend, opening week and then the lifetime run. Nothing less would suffice."

Considering the man who is the 'Father of 100 crore and 200 crore clubs', courtesy Ghajini and 3 Idiots respectively (which were the first to amass such huge total), one can well expect Aamir to be prepared for this eventuality.

"With great power comes great responsibility. The adage couldn't have been truer," quips a filmmaker, "Other Khans have already demonstrated that with Salman getting five 100 crore successes in a row and Shah Rukh Khan too scoring four back to back centuries. In fact Aamir's Talaash fell just short of the 100 crore mark but that's understandable since it wasn't a quintessential commercial film. However, Dhoom 3 is one such film and that should up the ante."

Considering favourable response to the film's promo, sequel factor, good mix of cast, a production house (Yash Raj Films) that is known for its quality outings, long standing wait for the audience and very importantly, a release during the holiday season (Christmas falls in the middle of the week), everything appears to be in order for Dhoom 3.

"Still, predictions will always be predictions. So many positive factors may promise a favourable result but eventually the content has to be lapped up by the audience to attain such mammoth totals. If that is absent, no reputation can be heavy-weight enough to ensure a long run for your film. Of course a 100 crore is a given for Dhoom 3 but looking at the way Krrish 3 has marched towards the 200 crore mark, Aamir indeed has a task in hand to surpass this milestone. To reach there, factors over and above his superstar presence have to fall in place. If the content works, sky is the limit," the trade insider sums it up.

Will that happen? Our gut instinct says yes, but then we would hold on to our horses till the film is out in theatres.