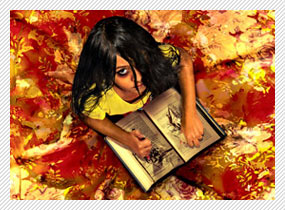 Pizza released last weekend and there are some understated gems that Bollywood Hungama would like to share with you!

1. Given its plot, Pizza could actually have been titled Kahaani 2, and that may well have done wonders to its prospects

2. In a film about Pizzas, it is a box of chocolates that ends up playing the biggest role

3. Meanwhile ghosts like to eat pizza with an extra topping of worms and leaches all over it

4. Never enter a bungalow which gives a fore-warning of 'Bose DK Bhaag!' The moment you ring a bell. Can't you see, the signs are all there?

5. All women, whether in or out of thus haunted bungalow, are pregnant and each of them do their bit to raise the horror quotient

6. Never think that disconnected landlines do not work in a haunted house. They could still turn out to be communication device, even when a call is made to a cell-phone belonging to you or even the cops

7. Never disrespect a 'baba' type person who looks like a 'bhikhaari'. He could be a 'Swami' no less who loves to have his pizza with extra jalapenos and olives on a thin crust

8. Never sleep while a horror film is on. Chances are bright that not just would you dream of ghosts too, you may actually end up seeing one in real life

9. Never think that since you don't believe in ghosts, you won't end up seeing one since 'har kisike darr ka ek pal hota hai, aur woh pal kabhi bhi aa sakta hai'. Are you looking behind your curtains already?