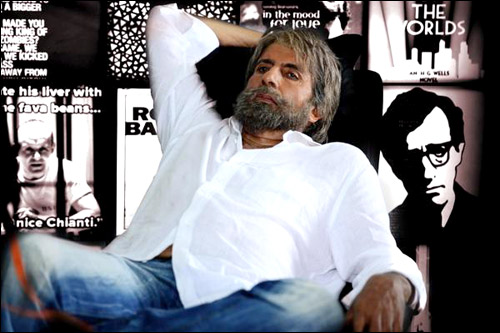 Legendary star Amitabh Bachchan will soon reveal a new shade with his upcoming R. Balki directorial Shamitabh. Recently, the actor took to Twitter to post his bearded look from the film.

He also wrote, "'Shamitabh' in the day .. its quite an effort to live with that hair all day !!" Surrounded with Hollywood movie posters and a picture of Woody Allen, the picture sees Amitabh dressed in casuals, with grey messy hair and beard as he also sports Surma (black eyeliner) that adds an edge to his charismatic look. In the film, Amitabh will be seen lending his voice to the mute Dhanush.

Big B and Balki have always experimented with the former's looks and characters in all their movies together. While in Cheeni Kum, Amitabh played the arrogant chef with salt pepper look who falls in love with the young Tabu, his yet another film with Balki Paa saw him playing the role of a 13 year old boy affected with Progeria.

R. Balki's Shamitabh will also mark the debut of Kamal Haasan's second daughter Akshara. The music for the film will be composed by Illayraja.