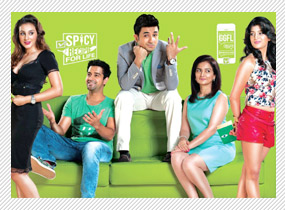 One of the upcoming films this month happens to be Amit Sahni Ki List. Though the film has Vir Das in lead, here are the 5 reasons why we feel the film will struggle to make a mark at the Box Office.

1)  Topping all the reasons is its really vague title, which, for starters, makes no sense at all and also doesn't even speak anything about the film. Isse accha toh mere ghar ka ration ki list hai/ mere girlfriends ki list hai, are the kind of comments expected from the masses.

2) With names like Vir Das, Vega Tamotia, Anindita Naiyar and Kavi Shastri, who have no major hits to their credit, the film may just land up failing to pull the audiences to the theaters.

3) A recent news piece stated that, for one of the scenes, the film's makers roped in their crew members' wives and girlfriends! This could be one of the many attempts by the film's makers to save money. The second attempt is surely not to spend money on the film's publicity. Needless to say that in today's times, no publicity means no audience!

4) The film has hardly any 'followers' on one of the most popular mediums like twitter (less than 1000 followers to be precise!). If there are so few followers on twitter itself, how can anyone expect to 'follow' the film to the theatres!

5) One may like it or hate it, but cannot ignore the BO pull of the skin show Hate Story 2 and also of the delicious horror flick Pizza 3D. These two factors put together could definitely affect the BO collections of Amit Sahni Ki List... which has neither of the above!