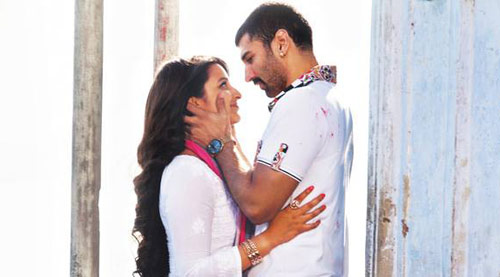 Over the years, Bollywood has evolved with better visuals, bigger production budgets and actors taking more interest in their film's releases. The film business has, altogether become a different ball game. With crores of rupees at stake on the subsequent success of any release, the filmmakers have been going that extra mile to entice the audience. However, of late, one of the biggest production houses Yash Raj Films (YRF) has been on a slowdown of sorts, their recent release Daawat-e-Ishq being a stellar example of this.


1. Looking back, we reminisce on the Yash Raj Films that had caught the audiences' attention for decades and had provided high quality entertainment, complete with glossy visuals and extravagant, larger than life characters. But in the recent past, we have seen a gradual shift from the glittering domain of films to the more earthy and realistic cinema that YRF is aiming at. For example, the recently released Mardaani which featured a grittier feel as opposed to the glossy faÃ§ade. It worked well for the Rani Mukerji starrer since the script also demanded it. However, similar kind of treatment being meted out to other films coming from the production house has certainly dented the audience's overall expectations, especially since the banner has been known for its larger than life movies.


2. Speaking of the audience's expectations, unlike earlier, there has been a drastic decrease in the anticipation levels among the film lovers for a YRF film's release. For instance, the last year's big release Dhoom 3 had immense anxiety and anticipation among the audience, so much so, that every little bit of news about the film was instantaneously snapped up. But in the case of Daawat-e-Ishq, the general indifference of the audience killed the prospects of the film opening on a big note at the box-office.

3. Apart from this, factors like poor music and relative absence of hype around the film severely damaged its overall collections. Contrary to YRF's previous musical hits, the music of Daawat-e-Ishq failed to strike a chord with the audience and none of the songs became a chartbuster. This definitely curtailed the film's reach to a large extent. This was further coupled with the almost nonexistent hype around the film which went a long way in killing its prospects at the box-office, despite having known faces like Aditya Roy Kapur and Parineeti Chopra, both of whom have back to back hits to their names.

4. Daawat-e-Ishq is also probably the only Yash Raj film till now, to release within a month's time after the production house's last release Mardaani. There was a constant back and forth going on with the release date of the two films and eventually, Daawat-e-Ishq got a very small window of just 3 weeks, for its publicity.

5. However, the biggest drawback that we saw was the wrong positioning and marketing strategy YRF used to promote Daawat-e-Ishq. All the promotions of the film, including the title, suggested that it is a rom-com that deals with theme of food. One expected a light hearted film with a visual treat of food porn as Aditya plays the owner of a Mughlai restaurant, which is known for its appetizing dishes. The last leg of promotions to make this 'thandi' film hot among the young audiences too had the lead pair of Parineeti Chopra and Aditya Roy Kapur going on a 'Food Yatra' from Mumbai to Chandigarh. However, when the audiences went into the theatres, there was a completely different film dealing with the subject of dowry waiting for them. When you have a film that deals with a social evil like dowry which unfortunately still exists today, why try to cover it under a rosy pink glass and sell it as a light hearted rom-com? Thanks to this 'Food Yatra' the audiences took on to Parineeti and Aditya's love for food with a broader view that Daawat-e-Ishq, as the name suggests, would eventually be a film about food, love and a grand feast, totally paradoxical to the film's theme.


Overall, despite being a decent watch featuring good actors, the film's convenient-lousy screenplay, poor music, unappetizing visuals and massively flawed marketing plan did a lot of damage to the film's prospects at the box-office.


We hope that from this experience, Yash Raj Films, now under the tutelage of Aditya Chopra, does find its way back to the shining emblem of glitz, glamour and larger than life films, something that we have loved and cherished over the years.