Bollywood has always been the Mecca for style mongers. Latest trends of fashion right from hairstyle to shoes have all

made their name roshan because of our Bollywood style divas and trend baadshahs.

One can never underestimate the power of this seductive yet subtle saree! Made ragingly popular by the stunning Mumtaz it's still the first

choice of attire for Bollywood and 60s theme parties. 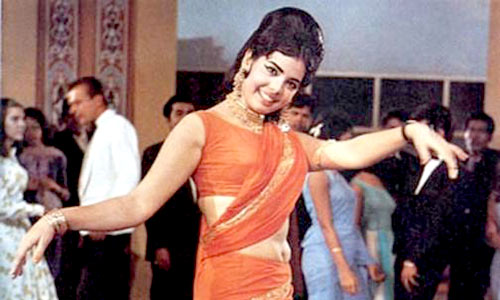 song in Hare Rama Hare Krishna. A varied version of these sexy glasses are still in trend among the women.

Another sexy style from the yesteryears; they were very flattering on the Indian body type and instantly became popular with almost all from

Vinod Khanna and Shashi Kapoor to Sharmila Tagore and Hema Malini rocking them on and off screens.

Thanks to Neetu Singh and later Neelam, this gorgeous open tresses style became a fad among young girls.

Yeah, these were popular too and jaani all the credit goes to Rajkumar and the jumping jack Jeetendra.

Oohhh...! Perhaps the best thing that ever happened to girls, this timeless style was seen religiously made a craze among the damsels by all

Teamed with those longer than river Nile legs, this looked a killer on Amitabh Bacchan. Guys would have but naturally followed!

Both cute and sexy, miniskirts got skyrocketed in popularity after Dimple Kapadia's Bobby.

Thanks again to the angry young man this rugged and I don't give a damn style spread like an epidemic among the boys.

Bangs never looked cuter than on her. Evident from the name itself, this was a trend started by Sadhna that really went viral among the girls.

If it hadn't been for Sridevi in Mr. India, we would have never known plain shiffon sarees could also look this hot!

Everybody from that era went crazy for those permed up hair curls made popular by our very own dhak dhak girl, Madhuri Dixit.

Starting the trend from Ghulam to Kuch Kuch Hota Hai and many more, Rani Mukherji made this trend popular.

Scary and cool, these knuckle rings picked up speed after Aamir was seen knocking the lights off Ronnie in Ghulam.

Who can forget the colourful headbands we all matched with our dresses when we were in schools; after watching Kajol in Kuch Kuch Hota

Although there have been many other ugghhh styles that people anyway went crazy following, I could ignore them all; but how can I possibly

this?!! Thanks a lot Salman for this ghastly style to burn our eyeballs!!

Not long back, this sexy avatar of saree became popular after the 'Desi Girl' Priyanka Chopra was seen doing thumkas in

It would be a sin not to mention this so hassle free, simply ingenious hairâ€¦or well, head style brought to the stage by Mr. Perfectionist,

Never thought something as small as this could get so much attention but those pretty, traditional and uniquely designed earrings worn by

Nor did moochein ever felt like they could ever become a synonym to sexy. But yes, Ranvir Singh made it sure they did.

Yeah, another popular item from Ranvir and even Akshay Kumar's jhola; mojris...Oozing out the Indian sexiness.
So, we can clearly say now... From head to toe...Bollywood has affected us... literally. Which ones did you try?