2017 is about to end and it’s time to look back at how the year has fared from a box office point of view. And obviously, it has not been a smooth ride. Some very prominent films that released with huge expectations flopped while a few of them underperformed. Thankfully, few flicks set the box office on fire and we also had some surprise hits. And then there was Baahubali 2 – The Conclusion which was in a league of its own and rewrote history.

We asked people in the trade to give their views on this aspect and most of them were more or less on the same page. Akshaye Rathi, film exhibitor and distributor, gives an in-depth reply, “If I talk clearly from the commercial standpoint, then it has been a disappointment. But if I talk from the standpoint of learning, then it has been a year of great learning. The lessons unfortunately have been learnt the hard way that things on the paper matter a lot more than what we think. The budget and the content of the film are of paramount importance. We have seen a big-scale Rangoon fail and we have seen a much smaller Hindi Medium work. We have seen a film like Baahubali 2 – The Conclusion defy all the notions, odds and beliefs that we had about cinema, crossing the linguistic and cultural barriers and even the idea of a non-festival release. Then we have seen Salman Khan in a film like Tubelight which released in 4,500-4,600 screens failing miserably and then succeeding incredibly in Tiger Zinda Hai. So what we have realized and hopefully come to terms with is the fact that we need to learn to follow the audience’s diktat to the T. We shouldn’t be seeing cinema just as an art form. It is as much of a business and as much of a commercial activity as an art form. We need to just tell the stories in the right form and in the right medium.”

Trade analyst Taran Adarsh minces no words when he says, “It’s been a disastrous year. But there have been silver linings of course thanks to films like Tiger Zinda Hai, Fukrey Returns, Golmaal Again, Baahubali 2 – The Conclusion, Badrinath Ki Dulhania etc. But the problem is that you have one hit film coming in and it is followed by 15-20 flops. So you are back to square one. As a result, there are some important things to keep in mind. First comes the content and how to plan your releases is very important. You can’t be surrounding your film with two biggies; you’ll get crushed.” He further adds, “Also, you have to make the film in a stipulated budget. You have to keep the economics in mind and have to understand what kind of recoveries you are going to make. A lot of times, the makers tend to overspend thinking that they will have returns but there are no returns.”

Leading distributor Rajesh Thadani on the other hand states, “The year is not as good as expected and it could have been better.” He agrees that in the last month of the year, Tiger Zinda Hai and Fukrey Returns have given the much-needed relief to the industry and trade. Harveen Singh, distributor from Rajasthan meanwhile emphasizes, “Overall the year has not been that bad as we have had some huge grossers like Baahubali 2 – The Conclusion, Tiger Zinda Hai, Jolly LLB 2, Toilet – Ek Prem Katha, Golmaal Again, Judwaa 2 etc. But it could have been better and a few more hits would have been more than welcome. Thankfully, small films in between did good business like Secret Superstar, Hindi Medium, Bareilly Ki Barfi, Shubh Mangal Saavdhan, Fukrey Returns etc.”

Girish Johar, film trade and business analyst too isn’t entirely pessimistic but says, “Despite Tiger Zinda Hai doing quite well, we are overall on a shortfall on a year-on-year basis from 8-10% vis-à-vis last year. Even if Tiger Zinda Hai performs exceedingly well beyond everyone’s expectations, even then we are falling short. Hence, it is a little downer for us. If films like Tubelight, Jab Harry Met Sejal, Jagga Jasoos etc. had done their part and excelled at the box office, then we would have had a very good year.” Trade analyst Atul Mohan states, “The year was quite okay, chalta hai types! It was nothing extraordinary. Baahubali 2 – The Conclusion was one of the biggest saving factors and if this film had not come, the scenario would have been really, really bad. That film collected Rs. 500 crores which is 2 or 3 big Hindi films collectively earn at times. We also had huge hits like Golmaal Again and Tiger Zinda Hai thankfully.”

So do these experts feel that lessons have been learnt and in that regard, 2018 would be better? “I hope so,” says Taran Adarsh and then opines, “We should learn from our mistakes and to rectify them is most important. Otherwise, we’ll keep doing the same mistakes. I think 2018 changes things.” Akshaye Rathi says, “The process is slow and we are the cusp of making that U-Turn. The realization has come about that just having a star or just having the right content is not enough. We need to blend commerce and arts that ultimately results in the magic of cinema.” 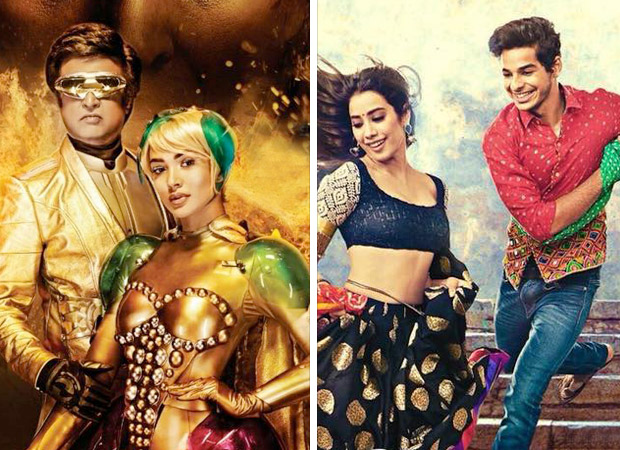 Atul Mohan says, “We need to take lot of corrective measures if we have to survive in the long run. Look at the marketing cost – it should be controlled. We have tried to learn something from our past and hopefully, the mistakes won’t be repeated in 2018” Even Rajesh Thadani is of the similar opinion, “I am sure that people will now concentrate on the content and I am sure that’s going to make some difference.”

Everyone however feels that the line-up of 2018 is very interesting and also lists films that they think would work big time. Atul Mohan emphasizes, “Race as a franchise has been successful. With the super success of Tiger Zinda Hai, the hype for Race 3 has really increased a lot. Shah Rukh Khan-Aanand L Rai film should work. Then there’s Padmavati. If it gets a smooth release, it’ll do unimaginable business. 2.0 has Shankar, A R Rahman, Rajinikanth and Akshay Kumar and that should also be huge. Thugs Of Hindostan is also highly awaited and they are working very hard to shoot in remote locations of Thailand. Pad Man, Aiyaary, the Sanjay Dutt biopic, Gold, Dhadak, Sui Dhaaga, Baaghi 2, Kedarnath etc also show promise.”

An optimistic Harveen Singh says, “Looking at the 2018 line-up, I definitely it will fare better than 2017. Both Salman Khan and Shah Rukh Khan faltered in a big way with Tubelight and Jab Harry Met Sejal. But Salman is now coming up with highly commercial films. Even Shah Rukh Khan would be more careful about his choices. Also next year, we have films like Pad Man, Gold, 2.0, Thugs Of Hindostan, Padmavati etc. that would attract lot of people. And not to forget, Hollywood films like Avengers: Infinity War and Jurassic World: Fallen Kingdom would be something to watch out for.” Girish Johar stresses on the films releasing in the beginning of the year, “Quite interesting films are lined up for the first few months like Pad Man, Pari, Parmanu: The Story of Pokhran, Sonu Ke Titu Ki Sweety etc. and hopefully Padmavati. These films do look promising and we do hope that we recover whatever losses we had in 2017 in the coming year.”

Akshaye Rathi has the last word when he says, “See cinema in India is primarily a form of escapism. It’s seen more as entertainment than a form of art. And I am not just talking about Mumbai, Delhi, Hyderabad and Bangalore. And we really need to make sure that the least common denominator of the Indian market is catered to. The day we do that, we have just seen the potential this year with Baahubali 2 – The Conclusion.”