The 100 crore club, despite its limited significance has turned 75 with Kesari in Hindi cinema, including two primarily Telugu films (the Bahubali franchise) and one Tamil movie (2.0). 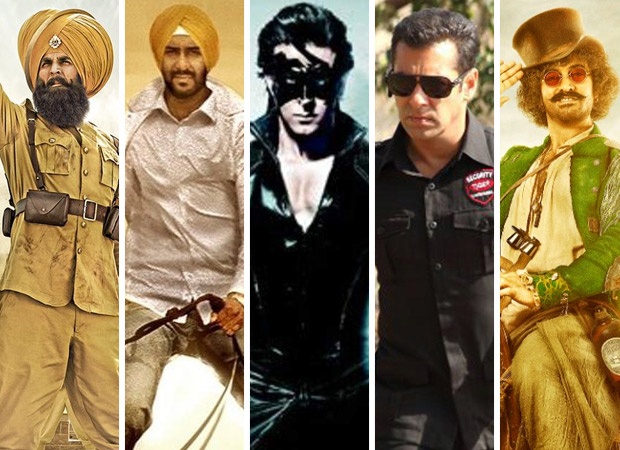 We use cameos as a broad term for friendly / one-scene / one-song / guest / special appearances. And the purpose of this feature is to point out the interesting fact that many cameos in the 100 crore club have been significant in different ways.

The first significance comes from the fact that so many actors and actresses, including big names, have made their first appearances in the 100 crore club through such cameos.

Ready (2011), for example, remains the ‘first’ 100 crore film of Sanjay Dutt and Kangana Ranaut. A few months down, he made another cameo in RA, One. And only in 2012 did the man make a mark in his first film in this club—Agneepath.

Even here, his was a negative character, and it was towards the end of the year that Sanjay got his first positive lead role—in Son Of Sardaar. Later, when good friends Vidhu Vinod Chopra and Rajkumar Hirani made their admittedly whitewashed biopic Sanju in 2018, the actor put in a cameo as himself!

Kangana Ranaut made it to the 100 crore club only twice as a heroine—in Krrish 3 and Tanu Weds Manu Returns, which came in 2013 and 2015 respectively, as against her 2011 cameo.

Bodyguard, which released a few weeks after Ready, saw the 100 crore debut of Katrina Kaif in a cameo in the title-track. Once again, Katrina did another such cameo—in the popular ‘Chikni Chameli’ in Agneepath before making her first entry in the lead in Ek Tha Tiger in mid-2012.

In a key sequence in Bodyguard, leading lady Kareena Kapoor Khan spoke in a different voice to the hero to tease him, and the producer Atul Agnihotri, decided to ‘cast’ his first leading lady (way back in the 1994 Aatish), Karisma Kapoor as that voice for younger sister Kareena! Atul’s first films as actor and producer were thus successful, while his first (and subsequent movies) as director probably did not have Karisma’s lucky charm!

But, so far, for Karisma, this remains her only film to reach this mark!

Rajinikanth and Priyanka Chopra started their 100 crore innings with their quick cameos in RA. One. Rajinikanth needed 7 years to clock up 2.0 (his only film in this list in Hindi), though Priyanka’s very next release, Don 2 and later many others made the grade.

Superstar Hrithik Roshan also entered this club through the ‘cameo backdoor’—he did the role of hero Shah Rukh Khan wearing a mask during a party in Don 2!

And it took Amitabh Bachchan a full six years to get a lead film (Thugs Of Hindostan, one of around 10 of these films that were flops despite being members of this club) after his brief singing cameo in Bol Bachchan (2012). This Rohit Shetty comedy ingeniously borrowed its title from his second name, as son Abhishek Bachchan was also in the lead. The expression Bol bacchan in Hindi refers to someone who talks big!

Before that, Madhuri Dixit-Nene enacted the popular number ‘Ghagra’ in Yeh Jawaani Hai Deewani in summer 2013. It took almost six more years for her to feature in the lead in a 100-crore film—in the recent Total Dhamaal.

In 2014, towards the climax, Suniel Shetty was given a ridiculous cameo in Jai Ho!. Sadly, however, the actor never made it to this club!

Finally, in 2017, Nana Patekar actually appeared fleetingly in Golmaal Again, after giving the voiceover for Shreyas Talpade when he was shown possessed and speaking in Nana’s voice! Nana, too, has no film as yet in this list in a featured role.

However, some cameos in these films were actually special. Ranbir Kapoor’s cameo in the end as an alien was a highlight of PK. Salman Khan came in as the ‘original’ Judwaa twins in the post-climax of Judwaa 2, which actually was a contemporary reboot of the 1997 hit.

Akshay Kumar’s appearance at the very end of Simmba gave a tangy introduction to director Rohit Shetty’s next, Sooryavanshi, the saga of an ATS officer and the beginning of a surefire new franchise. The official announcement of this film, which came a few weeks later, also hints at a possible cops’ universe of all three even in that film, as Ajay Devgn as Singham himself played a key role in Simmba. Such a meeting-point of protagonists will be a first in a Hindi film.

Parineeti Chopra’s brief ‘special appearance’ as Akshay’s wife in the recent and 75th 100 crore film, Kesari, was also special as she plays his late wife, who appears in his imagination at the right points to soothe him as well as inspire the soldier in him.

Similarly, Shah Rukh Khan’s role of a magician was meant to goad the timid Salman Khan to his true potential in Tubelight (2017).

Like Katrina (twice), Amitabh and Madhuri, so many of these artistes appeared merely to emote a song. Kareena Kapoor Khan did item songs in both Rowdy Rathore and Dabangg 2. Jacqueline Fernandez came into Baaghi 2 to re-create the cult Tezaab hit ‘Ek Do Teen Char’, while Priyanka Chopra traipsed in for the title song of Goliyon Ki RasLila—RamLila.