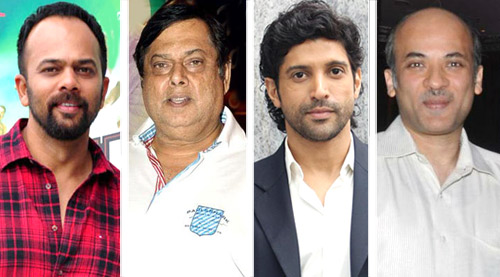 Remakes are essentially about a (perceived) minimum safety in returns, creative indolence or a fan's tribute. Yet, as we mentioned in an earlier story, most remakes turn turtle

and fail to match up.


Here, however, is the flipside of the story-ten remakes where the effort, which came from whichever combination of the three reasons mentioned above, worked as well or better than the originals.

And the reasons for this happy state of affairs.


Bol Bachchan (Directed by: Rohit Shetty): Rohit Shetty's take on Hrishikesh Mukherjee's Gol Maal was so refreshing that we forgot the basic reference point to the original

comedy. His ingenious team of writers and him converted the original premise into a complete bonanza of repeat-value, hilarious entertainment. Farhad-Sajid's lines were side-splitting and matched

Dr Rahi Masoom Reza's earlier triumph in calibre. And Ajay Devgn's and Abhishek Bachchan's characters and the script were so novel that we mentally split the original and this one into two

completely diverse films, with the uplifting result that both films are considered cult comedies today!


Now let us see what Rohit does with Ram Lakhan.


Chashme Baddoor (Directed by: David Dhawan): Well-written remake scripts that stand out on their own are a hallmark and distinguishing feature of good remakes-after all, every film

is judged standalone-original, copied or part of a franchise. Farhad-Sajid's dialogues were again of a high order in this ingeniously crafted comedy with the same basic plotline. Of course, it

received flak from hardcore fans of the simple Sai Paranjpye original (spelt Chashme Buddoor in English), but it remains one of David Dhawan's best and is a classy comedy.


Don (from the older Don, which was also from China Town) (Directed by: Farhan Akhtar): The original Don (1978) directed by Chandra Barot was a far bigger hit

than Shakti Samanta's 1962 China Town, whose central idea it took smartly. The 2006 one, written and directed by Farhan Akhtar, whose father Javed Akhtar co-scripted the 1978 film, turned a crucial

part of the plot on its head-about which of the two lookalikes survive. The gamble paid off, the film did quite well and paved the way for a successful sequel, Don 2, in 2011.


Haath Ki Safai (Directed by: Prakash Mehra): Salim-Javed took the plot of Do Ustad (1959) and smartly recycled it, making the latter film a bigger hit. The new USPs were the

had turned successfully from villain to hero.

align the story in a better, contemporary and urban setting, cast top stars Salman Khan and Madhuri Dixit (both in-house discoveries) and mount it lavishly along with an all-hit music score to make

a film that remains the biggest hit of the entire 1990s.

Karma (Directed by: Subhash Ghai): Ramesh Sippy's Sholay spawned many clones and spoofs. It was left to showman Subhash Ghai to recycle it with smart similarities and smarter

changes into the film that emerged as a lesser yet immensely successful blockbuster. He repeated even the 70mm, but his success lay in the imaginative casting, making another cult villain after

Gabbar in Dr. Dang (Anupam Kher) and ensuring a high musical calibre with Laxmikant-Pyarelal to take the film to a 75-week run.

broadened the canvas and characters, made them delightfully apt for the early '90s and laced it with brilliant music (Jatin-Lalit) just like in the original (R.D. Burman). The result: a golden

jubilee hit that was the first of the Khiladi titles used for Akshay Kumar, though here it was a collective term for him and the three other protagonists, Ayesha Jhulka, Depak Tijori and

Mother India (Directed by: Mehboob Khan): Mehboob Khan modernized and enriched his own 1940 hit Aurat into the 1957 all-time blockbuster musical, with Naushad scoring higher than Anil Biswas' music in the older film. Today, Mother India is known as Hindi cinema's first multi-star film, but what we do not realize is that when it was released, only Nargis was a big name. Sunil Dutt, Rajendra Kumar and Raaj Kumar had careers that really took off only after the gargantuan success of this film!

had been brilliantly adapted from a Hollywood film. Farah and her writers Mushtaq Sheikh and Mayur Puri ingeniously used influences from the 1980 Karz - the reincarnated character avenging

murder, an opening sequence shown from the original film-as the song that inspired the title that now formed the film's protagonists' names! A similar pre-climax tableau song was also used. A super

entertainer with climax to match, it topped 2007's releases at the box-office.


Raja Hindustani (Directed by: Dharmesh Darshan): Admittedly, the film was not that good a rehash of the 1965 Suraj Prakash evergreen, Jab Jab Phool Khile, but something in the

plot and the script connected with the audiences, helped by Aamir Khan's presence, some hit music and the right emotions. This film actually topped 1996's hits and the song 'Pardesi Pardesi

Jaana Nahin' was almost as popular then as the 1965 evergreen from the original, 'Pardesiyon Se Na Ankhiyan Milaana'.