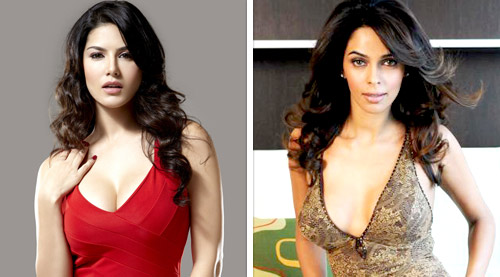 1. Sunny days are here: ...and the one feeling the blow is Mallika Sherawat. Sunny's new film Ek Paheli Leela has opened to large audiences. Mallika's latest film Dirty Politics had a piddly opening.


3. Oomph timed out: Mallika's sexy image has tired itself out. The audience was looking for a younger, less jaded sex symbol. Sunny was at the right place at the right time. Wearing the right clothesâ€¦ Or, not wearingâ€¦


4. Motormouth collapse: From ridiculing Indian women on international platforms to posing for selfies with celebrities whom she claimed to be bummy chummy with, Mallika made one outrageous faux pas after another thereby paving the way for a replacement.


5. Main jaisi hoon waisi hoon: While Mallika hid her past, Sunny very openly acknowledged her socially unacceptable antecedents. She came to Bollywood to re-build her life, not to flash her 'connections.'


6. Honestly speaking: Sunny's honesty won the day. Mallika was undone by her high-handed attitude and wrong selection of roles. The lineup of her flops in a 10-year career is daunting.


7. Wrong company: No star is self-made. Mallika seems to have no infrastructure or support system to guide or further her career. Sunny's husband Daniel Weber takes care of everything while his biwi makes the bucks.


8. Virgin claims: Mallika has never been seen in a relationship, never espied having a cosy dinner with a male friend. A distinct element of hypocrisy has crept into her public image.


9. Sun-Sunny-khez: Sunny's Leela has opened to encouraging crowds everywhere. The film is expected to be one of the few profit-making ventures of the year.


10. Sequel to Leela already being planned: Says maverick producer Pritish Nandy, "We're doing Mastizaade with her. Sunny Leone is in a league of her own."

Mallika Sherawat has the most apt response…