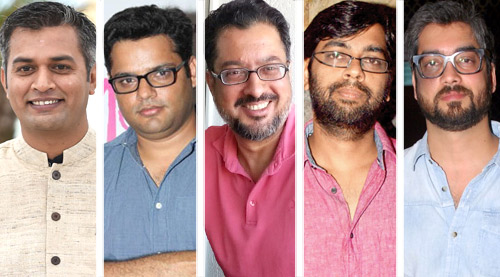 They came, they shot they conquered. 2015 had its share of new directors, some of them of extraordinary caliber. We look at the ten who are likely to become torchbearers and

carry the cause of Hindi cinema forward.

1. Neeraj Ghaywan: His directorial debut in Masaan is remarkable on many counts. The film set in Varanasi is as ambitious as it can get. There are two distinct stories about thwarted

and love two bereaved souls floating down the Ganga to meet and converge finally. Hugely ambitious and epic in scope, though the film was made at an estimate budget of Rs 5 crores. Way to go.

value: infinite. The film about a mismatched couple in Hardwar was funny, warm, real and heartwarming. Can't wait to see what Sharat does next. PS. Strictly speaking this was not Sharat's debut

3. Anoop Singh: Singh's Qissa conveyed a surreal epic sweep. The story of a Sikh man played by Irrfan and his obsession with a male heir built up into a tragedy of Shakespearean

proportions. This is a literate, articulate original directorial voice.

4. Kanu Behl: Titli marks the debut of a director who can make us squirm in our seats with his unprecedented level of realism in his art. I see Kanu as the true inheritor of the

cinema of Shyam Benegal and Govind Nihalani. Let's hope he doesn't decide to follow Farah (Khan) or worse, sets off to find Fanny.

5. Rikhil Bahadur: Time Out may not be a film that too many people saw or heard about it. But it was a bold brave and path breaking attempt to show what happens when your elder

brother whom you hero-worship turns out to be gay. Article 377, here they come.

6. Amit Ravindranath Sharma: He's huge in the world of ads, Amit Sharma's feature-film debut Tevar was an attempt at a big masala film which failed. But there is potential here. The

guy only needs to find his mÃ©tier.

7. Krish: Seasoned director of Telugu cinema, Krish made his Hindi debut with Gabbar Is Back a remake of the Telugu hit Ramanna originally directed by A R Murugadoss. The

film's anti-corruption message was loud, as it was meant to be.

8. Vikramjit Singh: Roy failed miserably in spite of Ranbir, Arjun, Jacqueline and the 50 shades of red-crimson lipstick that she wore. But somehow I feel there is more to Singh than

Roy. And the lip gloss.

10. Vibhu Puri: Though his Hawaizaada was a flop, Puri a protege of Sanjay Leela Bhansali showed every sign of following in his guru's footsteps in this big splashy colourful period-

Mahesh Tamhane: Though in Marathi, Court is a film so liberated from the restrictions of the spoken language that we can only say, legalese has no language. Even if Mahesh Tamhane

never makes a film in Hindi we'll wait to see where he goes with his vision.