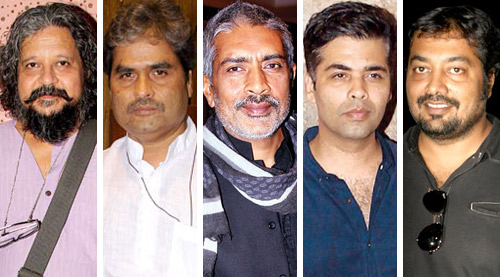 
Prakash Jha is all set to play the bad-man in his next film Gangaajal 2. We don't know what the nature of his diabolism would be. But we suspect he will be as dark and evil as Manoj Bajpayee in Jha's Raajneeti or Mohan Agashe in Mrityudand.


Now we hear Anurag Kashyap will play the arch-villain opposite Sonakshi Sinha in A Murugadoss' next. Here's looking at which villainous roles we'd like prominent filmmakers to play.


1. Prakash Jha as Laloo Yadav: Though a Nitish Kumar loyalist wouldn't it be fun to watch PJ as a Laloo-esque party crasher in a political drama set in Bihar? Think about it. Ajay Devgn can play Nitish Kumar.


2. Rohit Shetty as the Terminator: With his brawny bravado, loopy grin and of course his love for exploding cars and other costly stunts, Rohit Shetty would make a perfect replacement for Arnold Schwarzenegger.


3. Subhash Ghai as Hannibal Lecter: The Showman came to cinema to be a hero. He played the lead in Umang and then quickly crash-landed into minor acting parts in Aradhana and the rest. Ghai also loves to make one-shot appearances in all the films that he directs. Wouldn't we love to see Ghai return to full-fledged acting in a negative role? Anthony Hopkin's serial killer's part in The Silence Of The Lambs would be perfect for Ghai. His new discovery Mishti can play Jodie Foster.


4. David Dhawan as Gabbar Singh: Okay, we know Akshay Kumar played Gabbar in a recently released film. But trust me, that's just an illusion. David Dhawan would be perfect fit as the real Gabbar Singh. For one, David matches Amjad Khan's girth, and then some more. Secondly, when David would mouth Gabbar's legendary lines like 'Kitne aadmi tthey' and 'Tera kya hoga, Kaalia?' it would be taking the character to another level.


5. Sanjay Leela Bhansali as Mogambo: If you know the passionate filmmaker, you'd know how much larger-than-life and flamboyant he can be when he is at work. Yup, there is a Mogmabo lurking in SLB ready to be tapped.


6. Ram Gopal Varma as The Joker: The wicked sense of humour, bordering almost on the sadistic...doesn't it remind you of someone we know? Ramu would be a great fill-in for Jack Nicholson in Batman


7. Farah Khan as Nurse Ratched: The ultimate female villain, the Nurse who torments the psychologically disturbed Jack Nicholson in One Flew Over The Cuckoo's Nest. Farah would be the perfect Nurse Ratched if Shah Rukh Khan agrees to play the cuckoo patient. What say?


8. Karan Johar as Norman Bates: As Mummy's blue-eyed boy who is a closet serial killer in Alfred Hithcock's Psycho, Anthony Perkins sent a chill up the collective audiences' spine. Imagine Karan Johar creeping up on the girl in the shower with a knife in his hand... Scareeeeee! We can even visualize the posters... 'KJo as Psycho.'


9. Imtiaz Ali as Joker: Heath Ledger was lean, mean and magnetic and athletic as the menacing evil Joker in The Dark Knight. Imtiaz can pull it off. Confidently.