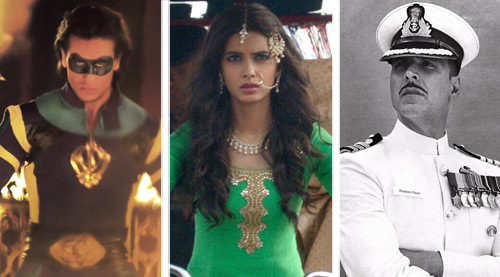 After managing a decent opening weekend, A Flying Jatt fell on at the box office during its first Monday. With Rs. 2.5 crore coming in, the film has reached a total of Rs. 31.95 crore. The film needs to now keep accumulating numbers at least in the same range so that the first week billing is decent and exhibitors have some confidence around its continued run in the second week.

Happy Bhag Jayegi is seeing good word of mouth continuing to help its run. While that has already been evidenced over the weekend, even on Monday it was decent with collections to the tune of Rs. 0.65 crore*. The film's total currently reads as Rs. 22.75 crore*. While Rs. 25 crore would be crossed by the coming weekend, it has to be seen how much further does the Diana Penty starrer go from that point on.

Rustom is bringing on bonus numbers for its makers. For the first time though its collections went below the Rs. 1 crore mark on a particular day. Still, with Rs. 0.75 crore* more coming in, the film has now gone past the Rs. 123 crore mark. The only record that it is now fighting for is the one for Akshay Kumar's second highest grosser ever, Airlift [Rs. 129 crore]. With Rs. 6 crore more to go, it could well become possible in next 10 days if the film continues with the same pace on a day by day basis.