Each day a lot of things happen in the world of Bollywood. From new film announcements to celebrities being spotted with their rumoured partners, to of course social engagements, Bollywood News, and celebrations. Rounding up the rather active day in a comprehensive way, Bollywood Hungama brings to you a specialized way to catch up on the latest Bollywood news. So from, Rahul Bhatt revealing he received big offers for images from the Ranbir Kapoor – Alia Bhatt wedding, to KGF – Chapter 2 featuring 6 AM shows, to the Yash starrer seeing unprecedented advance booking, to Akshay Kumar joining Ajay Devgn, and Shah Rukh Khan on an endorsement deal, here are today’s latest top trending entertainment and Bollywood news. 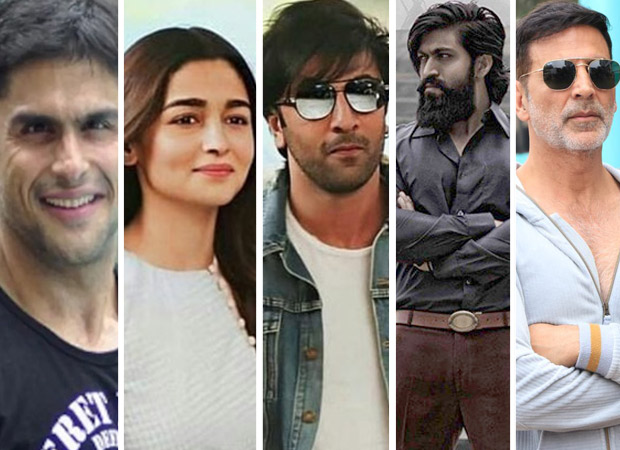 Rahul Bhatt rubbishes Ranbir Kapoor - Alia Bhatt wedding date shift; says he received big offers for exclusives photos
Mahesh Bhatt’s son Rahul Bhatt is in a quandary. A prominent website and a television channel have quoted him saying his stepsister Alia Bhatt’s wedding with Ranbir Kapoor has been postponed from April 14 to April 20 due to security reasons. Read on to see what he Says.

EXCLUSIVE: UNPRECEDENTED demand for KGF - Chapter 2; in the HISTORY of Surat, for the first time, shows to start from 6:00 am
The Covid-induced lockdown led to the closure of cinema halls with immediate effect. Moreover, theatres were the last to open in most states. The cinema business was badly hit, with certain sections predicting that box office would never be the same again. Continue reading for Details.

After MIND-BOGGLING advance sales of KGF - Chapter 2’s Hindi version, trade feels that it can collect Rs. 45-50 crores at box office on Day 1!
KGF - Chapter 2, starring superstar Yash is all set to release in cinemas on April 14. The first part of the Kannada film clashed with Shah Rukh Khan’s Zero. Yet, the Hindi dubbed version managed to grow with a strong word of mouth and earned Rs. 44.09 crore. It became a huge hit on satellite and contributed to the craze. As a result, KGF - Chapter 2 became one of the most awaited films of 2022. The advance booking started with a bang last week, surprising everyone. Read More.

SCOOP: KGF 2 producers at loggerheads with multiplex association in South over revenue sharing deal; advance booking delayed
Back in Diwali, the national chains in the Hindi belts were at loggerheads with the team of Rohit Shetty’s Sooryavanshi over the revenue share model. While the makers demanded a share of 60 percent from the national chains in the opening weekend, the multiplexes stood their ground on 52 percent. It seems the scenario is repeating all over again, this time around down South. Continue Reading.

Elaichi Universe Expands: Akshay Kumar joins Ajay Devgn, Shah Rukh Khan, Hrithik Roshan and Salman Khan
The Elaichi Universe is one of the biggest IP's for the Hindi Film Industry today, surpassing the cop universe and spy universe. Ajay Devgn is undoubtedly the Tony Stark aka Iron Man of this universe, as he is the pioneer of Vimal. Through the journey, the Marvel aka. Pan Masala Brands assembled their Avengers to pack a solid punch. More details Here.