Our long-drawn independence struggle saga is filled with innumerable stories of bravery and valour. Sadly, a few of them have been lost in the pages of history or only have local awareness. Uyyalawada Narasimha Reddy is one such great man who is credited to have fought a decisive battle a decade before the great 1857 rebellion. Ram Charan takes up the challenge of making a film on this figure, titled SYE RAA NARASIMHA REDDY, and it features his father, megastar Chiranjeevi. The presence of actors from other industries and that it releases in Hindi and other versions make SYE RAA NARASIMHA REDDY a pan-India film in the truest sense. So does SYE RAA NARASIMHA REDDY manage to entertain and stir up the viewers? Or does it fail to impress? Let’s analyse. 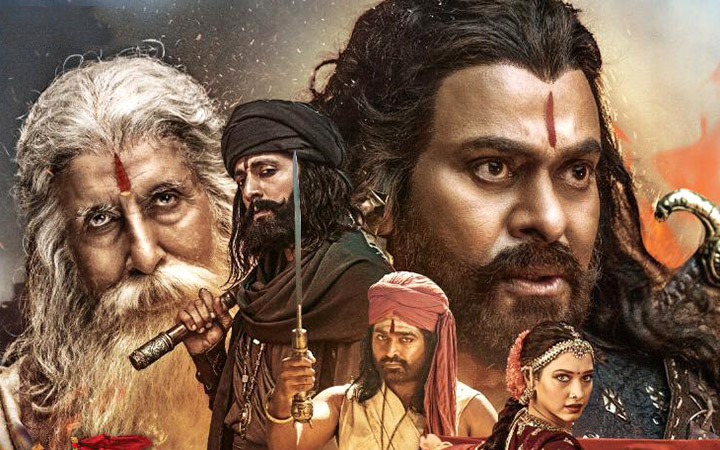 SYE RAA NARASIMHA REDDY is the story of India's first chapter of freedom struggle. The year is 1857. The soldiers of Rani Lakshmibai (Anushka Shetty) are wondering whether a handful of them will be able to fight the huge British army. In order to motivate them, the Queen narrates the story of the brave Narasimha Reddy (Chiranjeevi) who revolted against the British a decade before the 1857 revolt. The story then goes in flashback mode. Narasimha Reddy is a ruler of a part of the territory in South India called Rayalaseema. He is a part of a polygar which consists of several other rulers like Avuku Raju (Sudeep), Basi Reddy (Ravi Kishan) etc. All these kings get pension from the British and are expected to be submissive to the Crown. Narasimha Reddy however is in disagreement with this arrangement and is finding a way out to free his kingdom from the clutches of the British. The region faces drought and to appease the rain gods, Narasimha Reddy's learned mentor Guru Gosayi Venkanna (Amitabh Bachchan) asks for a yagna to be conducted. Narasimha is shocked as he learns that the last time a similar yagna took place was in his childhood and that time, he was married off to Siddhamma (Nayanthara). But the married couple was kept apart as there was a 'dosh' in their union and they could reunite only after another yagna. Narasimha Reddy is devastated at first as he loves Lakshmi (Tamannaah Bhatia). With a heavy heart, Narasimha Reddy leaves Lakshmi and advises her to use her dancing talent for the greater good. He then accepts Siddhamma and begins his married life. Despite the drought, the British officer Jackson (Oscar Skagerberg) asks for tax from farmers. He even mocks them and once while he’s doing so, Narasimha Reddy arrives and teaches him a lesson. An angry Jackson enters a village ceremony and eliminates 5 farmers and a child. Narasimha Reddy is so angry that he enters the British settlement, attacks the soldiers and then beheads Jackson. The other rulers of the polygar refuse to help him at first but then join Narasimha Reddy in challenging the mighty British Empire. What happens next forms the rest of the story.

Paruchuri Brothers's story is excellent and makes for a grand, patriotic film. They have obviously fictionalized a lot of developments in the plot but it has been done very well. Surender Reddy's screenplay is confusing in the beginning as too many characters get introduced and it might seem difficult to understand who is exactly related to whom. But in the later sequences, the script is quite effective and packs a punch. Manoj Muntashir and Jitender Pawar's dialogues are sharp although some of them are over the top.

Surender Reddy's direction is quite massy and simple. Most of the important scenes are well executed and leave a lasting impression. He stirs up the viewer’s emotions beautifully. One can’t help but hate the British for their atrocities and one can’t help but root for Narasimha Reddy for his acts. On the flipside, the initial portions are strictly average. The film moves too fast, since it’s already too long at 171 minutes and hence, a few scenes don’t make the desired impact. There’s also a déjà vu of BAAHUBALI, the Hollywood flick 300 and even surprisingly THE AVENGERS and this was avoidable in many places.

SYE RAA NARASIMHA REDDY’s initial portions are not very impressive. The proceedings are neither great nor terrible – it’s somewhere in between. The first 30-40 minutes are spent in introducing the characters, the setting, location etc. The entry of Siddhama makes for a great twist in the tale. But a few developments are difficult to digest at this point. Sidhamma remembers her marriage, which took place in the childhood, without fail but Narasimha Reddy doesn’t even know he’s married! However, the film really picks up in the scene where Jackson arrives at a farmland and mocks a farmer. The manner in which Narasimha Reddy gives a monologue and challenges Jackson is clapworthy. The intermission sequence however is even better and the audiences in single screen cinemas will go crazy at this point. The second half too has some great moments though they could never reach the level of the aforementioned sequences of first half. It also gets a bit too long. But it keeps one engaged. The finale is powerful and the film ends on a rocking note.

SYE RAA NARASIMHA REDDY has a great ensemble cast but the film belongs to Chiranjeevi. No two doubts on that! He owns the film with his performance and style. It’s also commendable to see him doing action at this age so well. His stardom is intact and that adds a lot to his character and to the film at large. Sudeep is quite good as the mysterious and badass ruler and would be liked by audiences. Tamannaah Bhatia has a supporting role but she springs a surprise in the second half. Watch out! Nayanthara gets a very raw deal and the only scene where she leaves a mark is when she confesses her love for Narasimha Reddy. Vijay Sethupathi (Raja Paandi) has a late entry but is entertaining. Jagapathi Babu (Veera Reddy) creates an impact in the pre climax. Oscar Skagerberg is excellent as the villain and would be remembered, though he’s there only in the first half. Ravi Kishan and Mukesh Rishi act well but their voices are dubbed by someone else, which makes their performance a little awkward. Lakshmi Gopalaswamy (Narasimha Reddy’s mother) is passable. Lastly, Amitabh Bachchan is smashing in the special appearance while Anushka Shetty as always is impressive.

Amit Trivedi's music is nothing great but works in the film. 'Jaago Narsimha Jaago Re', played in the beginning, fails to make a mark. 'Sandal Meraa Mann' isn’t memorable either. 'Sye Raa' comes at an excellent juncture and very well shot. 'Saansein Teri Desh Hai' is played in the end credits but doesn’t have the period feel. Julius Packiam's background score is way better and adds to the drama and exhilaration.

Ratnavelu's cinematography is top-notch and goes on another level in the battle and action scenes. Rajeevan's production design is quite grand as well as authentic. Greg Powell, Lee Whittaker, Ram-Laxman and A Vijay's action is one of the highpoints of the film. It’s gory at times but done well overall. Anju Modi, Sushmita Konidela and Utthara Menon's costumes are regal. Sreekar Prasad’s editing is quite fast-paced and even reckless at places, which could have been avoided.

On the whole, SYE RAA NARASIMHA REDDY is a great patriotic saga and a visual spectacle that leaves a tremendous mark thanks to its plot, Chiranjeevi’s performance and massy execution. At the box office, it has the potential to succeed.

War, Sye Raa Narasimha Reddy, Joker: Why do the most VIOLENT films release on October 2, that is, International Day Of Non-Violence?

Sye Raa Narasimha Reddy: "I feel a mix of nervousness and excitement that comes before the release of every film," says Ram Charan about producing Chiranjeevi's film

Chiranjeevi delayed Sye Raa Narasimha Reddy by a decade for political career; says Amitabh Bachchan had advised him not to join politics

superb movie.i think this movie will beat all the records.excellent acting by chiranjeev.so called…

I AM PROUD TO BE I AM INDIAN, ONE OF BEST MOVIE, BOSSBUSTER, "JAI MEGA STAR". CONGRATULATIONS ALL…