With stunning visuals and throwback references to the previous films, and of course and audio tracks that brings back memories, JURASSIC WORLD: DOMINION is definitely worth a watch.

Back in 1990, we saw the release of the path breaking film JURASSIC PARK. A film which introduced the cinema going audience to the visual spectacle of viewing dinosaurs on the big screen. Wrapped with the awe and terror they could induce created a massive stir. Following this, there were four more film which released in the series, with the last being JURASSIC WORLD: FALLEN KINGDOM. Now years later, we see the release of the sixth and final film in the JURASSIC franchise with JURASSIC WORLD: DOMINION. But will the new film entice audience like the first one, or will it be just another cash grab attempt like so many other franchise films, is what we analyse. 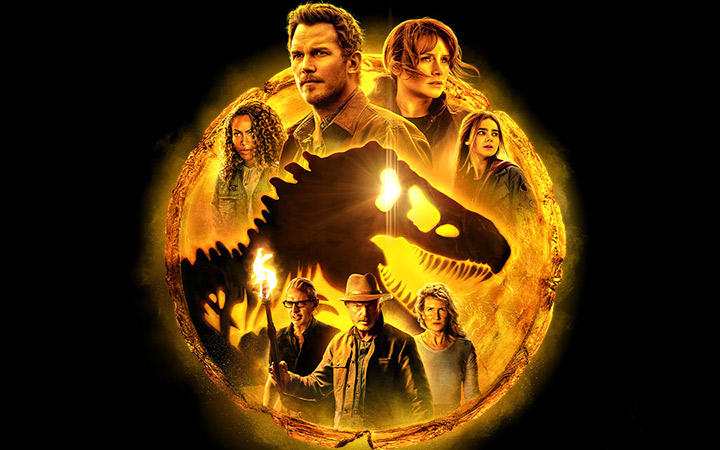 JURASSIC WORLD: DOMINION takes place four years after Isla Nublar has been destroyed. Dinosaurs now live—and hunt—alongside humans all over the world. This fragile balance will reshape the future and determine, once and for all, whether human beings are to remain the apex predators on a planet they now share with history's most fearsome creatures. In between this mix, a new company Biosyn has taken over the process to identify the genetics that could help the human race. But much like its predecessors, the company run by a money grubbing business tycoon, looks for profit at the cost of humanity. From kidnapping the genetically enhanced Maisie Lockwood, to developing predatory dinosaurs for nefarious purposes, Biosyn delves into almost everything. Things come to head when Owen Grady and Claire Dearing set off on an adventure to rescue Maisie.

Right from the onset, the viewer is taken into the Jurassic era with visuals of long lost but not forgotten creatures that now roam the Earth. In a precarious balance between the beasts and humans, the latter have established a black market where anything dinosaur related is available for a price. This underhand dealings lead to constant tussles between those who live life alongside the creatures and those that look for profits. Much like the previous JURASSIC films, this one too follows a similar line that reads, ‘Life will not be contained; Life finds a way’. In this respect JURASSIC WORLD: DOMINION is rather repetitive with nothing new to offer in terms of a basic story line. However, the way in which director Colin Trevorrow executes this visual spectacle is what makes the difference. Despite being an old story being told anew, JURASSIC WORLD: DOMINION features some gripping visuals. In fact, some scenes will definitely leave the audience spellbound, a feeling reminiscent of watching the first film in the series.

However, it isn’t all just a treat for the senses. JURASSIC WORLD: DOMINION does have its share of drawbacks. Apart from the repetitiveness, the film is highly predictable with twists that are seen much before they arrive. Though, Trevorrow has thrown in some clap worthy moments and some good jump scares, the overall appeal is diminished due to the predictability. Another part that can be a let-down is the visuals which come across as unfinished renders. A certain sequence featuring some creatures from the past revived; seem to be shot in the 90’s, the jarring motion to the monorail track approach does seem out of place in a film like this. Thankfully though, these moments are limited.

Talking about the film, JURASSIC WORLD: DOMINION starts off on a fast paced note; but by the interval, on screen proceedings slow down considerably. Making things even worse is the post interval segment that deals with establishing a bit of drama. While the audience is kept in their seat with the sweeping visuals and the life-like rendering, there are moments when one feels the pace needs to be upped.

As for the performances, Chris Pratt as Owen Grady, and Bryce Dallas Howard as Claire Dearing have both done a good job in their given roles. Reprising their characters from the previous films each have given their all. But a welcome sight is the return of the cast members from JURASSIC PARK with Laura Dern as Dr. Ellie Sattler, Jeff Goldblum as Dr. Ian Malcolm and Sam Neil as Dr. Alan Grant making a comeback to the series. Though their return for the final chapter in the JURASSIC franchise was a nice touch, a special mention has to be made for each of the three who manage to recreate a similar bond they shared in the 1990 release. Apart from them, the rest of the supporting cast have done decently well in their given roles. 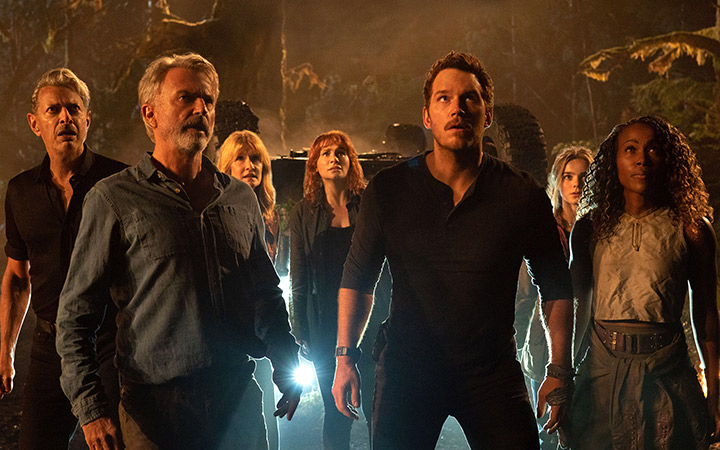 One thing that sands out when watching JURASSIC WORLD: DOMINION is the realization of how far filmmaking has come. From the jerky visuals and renders of JURASSIC PARK to the smooth and seamless visuals in DOMINION, the passage of time is clear. While the VFX and CGI team have done a marvellous job of recreating a species that has long been lost, there are times when one wished more could have been done. Assisting the visuals is the background score that sets the tempo for on screen happenings. Building the crescendo when needed, and rendering haunting tunes elsewhere the sound plays an integral part of the film.

On the whole, with throwback references and visuals to the previous five films, along with visuals and of course audio tracks that brings back memories from the past, JURASSIC WORLD: DOMINION is definitely worth a watch. For those who have watched the previous films and liked them, do not miss this closing chapter. At the box office, JURASSIC WORLD: DOMINION might face an uphill task. With little to no promotions in India, buzz surrounding the film is limited. However, like the recently released Tom Cruise starrer, this film too might see good growth in business over the weekend, especially with no competition from new Bollywood releases.