It hasn't really been a long time since Happy Bhag Jayegi [2016] released. The Mudassar Aziz directed affair had some good racy music in there which fitted well into the narrative. One expects the same in the film's sequel, Happy Phirr Bhag Jayegi, as well which has producers Aanand L. Rai and Krishika Lulla joining hands once again. With Sonakshi Sinha taking the lead this time around and Jimmy Sheirgill been the common factor, one waits to hear the kind of fun tunes that composer Sohail Sen has put together with Mudassar Aziz stepping in as the lyricist too. 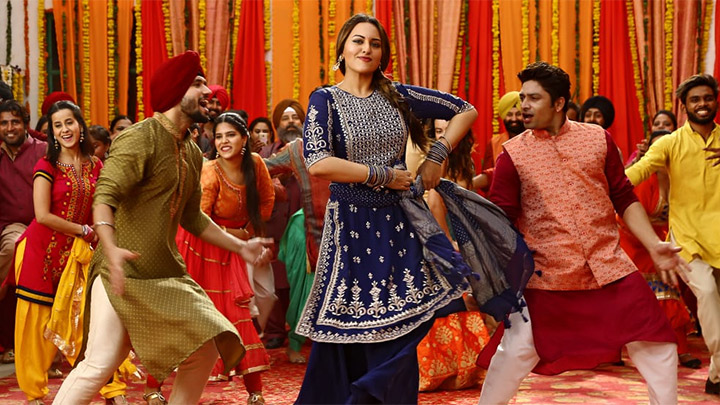 Neha Bhasin is in great form right at the beginning of the soundtrack as she brings on 'Swag Saha Nahi Jaye'. Based on a Punjabi folk tune that had also resulted in 'Reshmi Salwaar Kurta Jaali Da' that was heard almost six decades back in Naya Daur (1957), this one is a rollicking piece that makes for a foot-tapping affair. It is good to see Sonakshi Sinha letting her hair down with this fun number that has Sohail Sen and Shadab Faridi chipping in as the singers too with Shivangi Bhayana providing backup vocals. A track that would be heard long after the film is off the screens as well.

There is more fun in store with 'Kudiye Ni Tere' and this time around Shivangi Bhayana is the lead singer while giving company to Udit Narayan. It is good to hear the veteran singer again who sounds as fresh as ever, and one only ends up wondering why has he become so selective about his musical outings. The tune is somewhat experimental though as it mixes Punjabi flavor with a 'garba' touch to it, as a result of which the song doesn't really go all the way. Still, it is decent enough while it lasts.

The song that does catch your attention in a big way is 'Chin Chin Chu' which is indeed the highlight of Happy Phirr Bhag Jayegi. Heard earlier as 'Mera Naam Chin Chin Chu' [Singer: Geeta Dutt, Music Director: O.P Nayyar, Lyricist: Qamar Jalalabadi] in Howrah Bridge [1958], the song has a good context relevance in the film since it is set in China too where Sonakshi Sinha finds herself in the midst of all the mayhem. This time around, Jassie Gill and Sonakshi Sinha, both of whom are the lead actors in the sequel, step in as singers too and do quite well along with Mudassar Aziz (who contributes with rap) to bring on all the fun.

Next to arrive is a situational piece and while there is a Punjabi flavour here too, one expects it to add on more value as a part of the film's narrative. This time around Shahid Mallaya leads the show for the song that goes as 'Koi Gal Nai' while Piyush Mishra sings for himself. There is a bit of fun element that can be observed in this song that has rap portions by Mudassar Aziz. One waits to see how does this quirky number make an appearance in the film.

Title song 'Happy Bhag Jayegi' concludes the album on a high as both Daler Mehndi and Harshdeep Kaur are in their complete elements while rendering this one. Expect the song to make multiple appearances in the film at regular intervals since it is quite relevant to the theme and also is peppy enough to make for a lively inclusion. Suvarna Tiwari provides back-up vocals for this song that keeps the Punjabi flavour on.

The soundtrack of Happy Bhag Jayegi is good fun while it lasts. The music stays on to be largely lively and should aid in keeping the film's narrative fast paced too.