Blurr Movie Review: BLURR has some thrilling moments and boasts of some fine performances.

Despite some thrilling moments and fine performances BLURR suffers due to poor writing and low awareness.

BLURR is the story of a woman investigating the death of her sister. Gautami (Taapsee Pannu) is a blind woman who resides alone in Nainital in her house. She is tormented by the presence of someone in her house. She is about to hang herself but then changes her mind. At this point, the intruder kicks the stool beneath, due to which Gautami dies. Her twin sister Gayatri (Taapsee Pannu), based in Delhi with her husband Neil (Gulshan Devaiah), reaches Nainital after the former gets a feeling that Gautami is not fine. Though the cops rule out any foul play and conclude that Gautami was depressed after losing her eyesight and hence took her own life, Gayatri refuses to believe it. She finds clues that lead her to believe that Gautami was not alone when she died. Upon enquiries, she learns that Gautami had a boyfriend. She also realizes that she’s being followed but Neil and even the investigating inspector Chandel (Sumit Nijhawan) refuse to acknowledge it. Soon, Gayatri falls in trouble and on top of that, she realizes that even she will lose her eyesight soon, just like Gautami. What happens next forms the rest of the film. 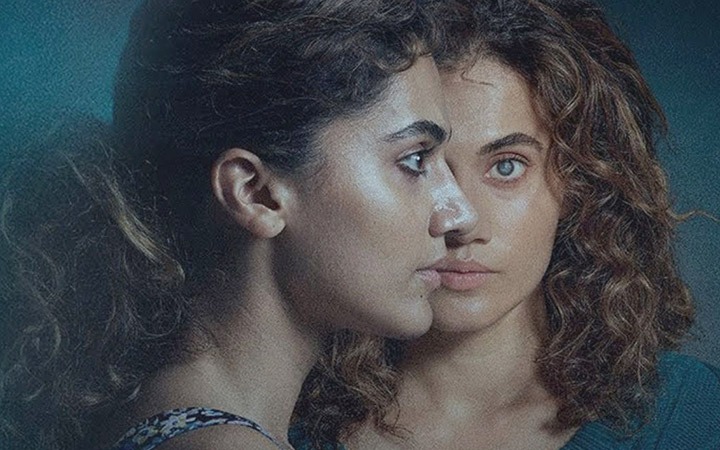 Ajay Bahl's direction is not up to the mark, and the director doesn’t seem to be in the form as he was in BA PASS [2013] and SECTION 375 [2019]. To give credit where it’s due, he successfully creates an eerie atmosphere. He makes good use of the locations, stormy weather, and the mansion where the film has been majorly shot. Also, not showing anyone’s face except Taapsee Pannu’s after her surgery is an interesting idea.

But his execution suffers due to poor writing. For instance, Gayatri goes all the way to check the CCTV footage of the municipal parking lot to find out who Gautami’s boyfriend was. Viewers, however, will wonder why she couldn’t have checked the footage in the hotel, where Gautami stayed with her lover and where Gayatri is also a guest. Gayatri’s decision to shift to her sister’s house after her major eye surgery and not stay in the hospital seemed unconvincing. She had no solid reason to do so. The track of Deepak and Chander also leaves viewers puzzled. Gayatri bumping into furniture and throwing things around because she’s losing her eyesight becomes laughable after a point. Lastly, the climax is too violent.

Speaking of performances, Taapsee Pannu, as always, puts her best foot forward and delivers a worthy performance. However, her act seems too similar to the one she had in the recently-released film, DOBAARAA [2022]. It’s like she walked from the sets of DOBAARAA to BLURR and began filming, without changing her costume or hairstyle! Gulshan Devaiah is fair though one would wish an actor of his calibre will get to do much more. Sumit Nijhawan is decent. Abhilash Thapliyal (Chander) plays a crucial part and is too good. Krutika Desai Khan (Radha Solanki) leaves a huge mark. Saurabh Chauhan (Bipin Nath) and Nitya Mathur (Ira) go a bit overboard. Raja Sevak (Dr Raman) and S M Zaheer (Hotel staffer) are passable.

BLURR has only one song – the title track – and it’s forgettable. Ketan Sodha's background score adds to the chills. Sudhir K Chaudhary's cinematography is neat. The locales of Uttarakhand are well captured. Nilesh Wagh's production design is appealing. Aejaz Gulab's action is gory. Lovedeep Gulyani's costumes are dull and it goes with the mood of the film. Manish Pradhan's editing is satisfactory.

On the whole, BLURR has some thrilling moments and boasts of some fine performances. But the film suffers due to poor writing and low awareness. Average fare.

Taapsee Pannu reveals what to expect from Blurr; says, “Trust my judgement in the thriller genre, Blurr is special”

Taapsee Pannu decides to stay blindfolded for 12 hours on sets of Blurr to get in the skin of her character!

Taapsee Pannu starrer Blurr's shooting was done at real locations; several heritage sites will be seen in the film

Gulshan Devaiah unravels the layers of his character from Blurr; expresses what a treat it is to work with Taapsee Pannu