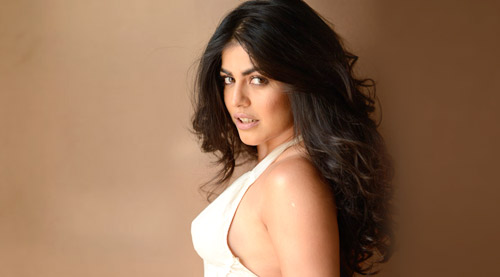 From Veejay on MTV to Ishq Vishk, then writing, hosting and producing Culture Shock for Travel Channel to acting in Delhi Belly to writing the screenplay of Luv Ka The End and then moving to New York and acting in over a 100 episodes on an American Soap called One Life To Live - Shenaz Treasury has seen it and done quite a lot, if not all. Now she has taken another step in the right direction, what with being a Contributor and Correspondent on the Nightly Show on Comedy Central USA which is produced by Jon Stewert. We get talking to the gorgeous woman.

You seem to be taking your career to an altogether different dimension, what with this English show 'Nightly Show' at Comedy Central in the US. This is pretty amazing Shenaz, isn't it?
I can say that I have had a full career. Extremely unexpected. Unplanned. Very exciting. And DIFFERENT! Of course right now, I'm only mentioning the ups. There's been plenty of years of struggle and downs and times I've almost given up. And those days will come again. They always do. Keeps me humble. But in the end, every-time, I hit rock bottom, something unexpected comes along and picks me up. And that's my life. Never constant. Always changing, unexpected, different and on the move. So, I try to treat success and failure equally and just have a good attitude to whatever life brings. Not as easy as it sounds.

How are you making it happen though Shenaz? Guess it is year of persistence out there in the West that is winning you some good visibility there?
I've been traveling back and forth from New York and Bombay for four years now. My family jokes, I travel from Mumbai to New York easier than I go to Colaba from Bandra. I went there on a vacation in 2010 and booked the soap - One Life To Live. I thought it would last forever, so I got a fancy apartment, shipped all my furniture and then a year later, after I was on more than 100 episodes, unexpectedly the show got cancelled! Overnight I was unemployed with a huge rent and all this Indian furniture.

That must have been distressing?
Well, since then I traveled back and forth doing whatever I got. I had to move out of my fancy apartment, put my furniture in storage and spent the last three years shuttling between both countries. I go wherever I get work! In fact, in December 2014, I was fed up and decided to move back to India. I have moved 16 times in the past 4 years as I wasn't able to commit to an apartment for more than three months; I had no idea where I was going to be the next day. I had just sold my last piece of furniture and was in my dusty storage packing up when I got a call from the Nightly Show saying they wanted to sign me on. My reaction to them was, "You're kidding. I have a ticket to move back to India in 2 days."

While the show is out there in the US, does it have a window for India as well?
I think so. But with all the censorship in India today, it would not be allowed to air here. So people just need to watch it on the comedy central website.

A few weeks back you spoke about women empowerment and quite a few have joined in as well. Guess this is one movement which is up there for the keeps?
Yes. I wrote the letter that had millions of shares. Feels like every Indian all over the world read it. And that's because every Indian woman identifies. I just articulated what it was like to be a woman who grew up in this country. I have started a blog for women to share their stories (http://itsnotourshame.tumblr.com/). But more than on that site, women post on my social media pages. It's an ongoing discussion and will end when harassment of women ends.

As for your foray in the world of West, is there something further exciting for you after Nightly Show?
I did a sit-com called Brown Nation. Maybe I will do more sit-coms. Or maybe I will just come back to India and produce a comedy show here. Maybe I will do stand-up or write and direct a film. Who knows?

One thing I've learned in life is, I never know where it's going to take me next. I have my smile on, my wits about me, deep breath and stay tuned for the ride.