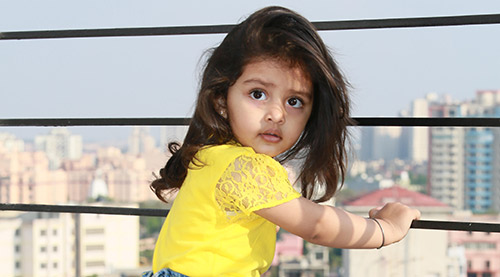 It was more than 50 years ago when a film was made with just a single character right through its 100 odd minute duration. The film was Yaadein [1964] and it featured none other than reigning superstar Sunil Dutt in lead.

Most recently, a similar experimental affair was seen in the form of British film Locke [2013]. It had Tom Hardy in the lead, and the entire film was set in a moving car.

Circa 2015 and the trend, which is not so common, is being taken forward with a film which has a sweet-n-simple title Pihu. The unique part about the film is that instead of an experienced actor, the central protagonist is a two year old girl. Interestingly, her real name is also Pihu and the film has been set as a social thriller, a genre that is seldom attempted in Hindi cinema.

No wonder, the film is being hailed as an almost impossible affair, even though the makers are confident that they would be able to pull it off.

Says filmmaker Vinod Kapri, who has been a journalist for 23 years, and is now a National Award winning director, "Pihu revolves around a two year old girl who gets into an unexpected situation where she is all by herself. The film moves ahead as a thriller. I am told that world over not many movies have been attempted with such stage and setting. Moreover, I believe it is a first ever with a child. It is a new challenge in itself and an exciting one at that."

The film has gone on floors and is expected to be wrapped up in a single schedule of 25 days.

"However, we are keeping our options open for a 35-40 days stint as well. After all, a two year old child can be unpredictable. It all depends on how she reacts and brings on the right emotions on screen."

There is some good pre-production that has gone into this to pre-empt the situation better. For starters, the film is being shot with a small crew of just 20 odd people, so that Pihu is not overwhelmed by the presence of too many people around her. Moreover, the entire crew has been stationed in a penthouse along with Pihu and her parents (who are also journalists) so that there is adequate familiarity set in.

"That's right, that's the least we can do for her," says Kapri, who has also recently won a National Award for Can't Take This Shit Anymore under Best Film in Social Issue category, "I have personally been with Pihu for six months. I wanted to closely study how she reacts and behaves on a normal day, so that accordingly I could insert such portions in the film. As a matter of fact we also gave her parents a professional camera to keep recording her activities for months at stretch. All that footage has turned out to be quite handy."

No wonder, for Vinod Kapri - whose other film Miss Tanakpur Haazir Ho has already been picked up by Fox Studio for distribution this Summer - there is good progress being made for Pihu as well, with choices opening up with good corporate houses.

"As of now I have to focus on delivering well with Pihu. The idea is to make a content driven film," says Kapri before signing off.