Last month, during the festive season of Ganesh Chaturthi, Wild Buffaloes Music released its debut single, ‘Sukh Karta Dukh Harta’ - Ganesh aarti. The music video of the aarti, released on the Wild Buffaloes Music YouTube channel, was received well by the audience and ended up going viral. The aarti song was sung by the harmonic singer Rekha Bhardwaj. 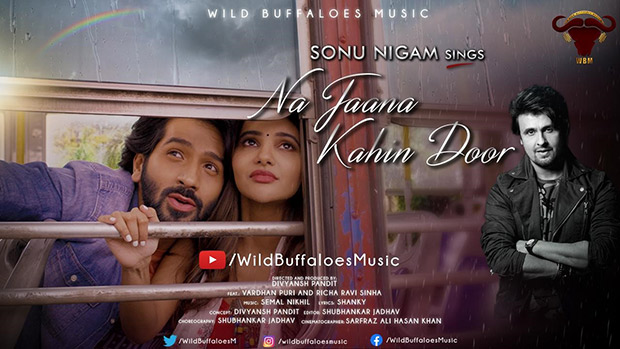 Wild Buffaloes Music in collaboration with Sonu Nigam, releases its next romantic single

Now, the music label has released its next single, a romantic number, and this time, it has taken a leap by collaborating with the legendary singer, Sonu Nigam. The lyrics of the song have been penned by Shanky and the music by the duo Semal Nikhil. The music video features Vardhan Puri, grandson of legendary actor Amrish Puri and actress Richa Sinha.

Conceptualized by the founder of WBM and filmmaker Divyansh Pandit, the music video has been completely set in a BEST bus in Mumbai. Presenting the characters, Vardhan and Rich like mundane commuters in a local bus, the music video is dreamy yet palatable. The magic pop moment is the involvement of the bus driver in the romantic escapades of Vardhan and Richa...a typical bystander’s behaviour.

Divyansh could not hold himself from expressing his fanboy emotions about working with Sonu Nigam. He expressed, “I have grown up on his songs is an understatement because I have lived them. He was an undetachable part of my world of music throughout my life and working with him today is not a dream come true because I feel I am still in a dream.” (He chuckles)

Viewers have received the song and the video with extreme warmth. Reels have begun to go viral on Instagram, where users from all walks of life have been performing the song and posting their videos. Some even went on to say that the song breathes the essence of the golden Hindi music era and yet is contemporary in its approach. A sweet spot struck by the makers.

When Semal Bhatt, from the duo, was approached he expressed, “I have been a fan ever since he anchored Sa Re Ga Ma Pa in 1995. I swear I never imagined that we would get to compose for his legendary voice. Had it not been for Wild Buffaloes Music, I don’t think we would have been able to see this dream come true and the best moment was when Sonu sir said ‘ki achhe gaane roz roz nahi Bante, agar koi bhi part phir se gaana ho to bata dena’. I mean, I was speechless seeing his humility. Also, when we heard the concept of the music video, we knew it that it was going to do justice to our music and that is what has happened.” When we asked Nikhil Kotibhaskar about his feelings of working with the legend, he said, “I not just got a chance to meet my teacher but also have his voice lent for our song, and that too on teacher’s day. Divine intervention hai yeh. I hope I could reply to him in words when he asked, ‘I hope I sang according to your expectations. I was numb. Upar se concept sun kar aisa laga ki yeh to meri kahani hai, sirf itna ki main bas mein naachaa nahi tha. But honestly, everybody must've imagined this at some point or the other on the bus... Bollywood to hamaare khoon mein hain.” (he giggled). The lyricist of the song, Shanky, who has been penning lyrics for all the short films under Divyansh’s Wild Buffaloes Entertainment, expressed his joy by saying, “I have never been this nervous. When Sonu sir was going through the lyrics and preparing for the recording, watching him prep was a very unique experience in itself and I was hoping that he would like the lyrics and gladly, he did. It was a once-in-a-lifetime experience. In fact, I don’t remember how many times I felt goosebumps throughout the recording. Us waqt laga ki mehnat safal ho gayi.”

The music video was released on October 10, 2022, and is available on Wild Buffaloes Music’s Youtube channel. The track is available on all major music streaming platforms.

The label is all set to take off with its next song, which will be sung by another Bollywood celebrity singer, however, details will be revealed soon.