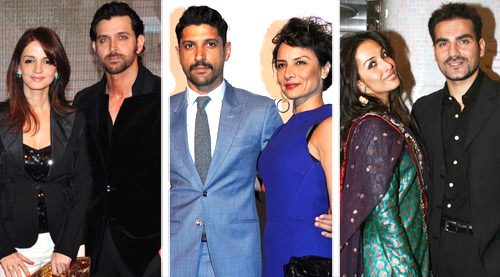 After Hrithik Roshan-Sussanne, Farhan Akhtar -Adhuna, it's Arbaaz Khan and Malika Arora who have apparently decided to go their separate ways and work towards the best interests of their two children. One hears of another long-lasting couple from Bollywood, a camera-friendly model-turned actor married to a glamorous ex-model, also struggling to keep their marriage alive.


But friends say, it's hard to believe that another seemingly perfect marriage has fallen apart.


I had once been to Adhuna and Farhan's home at Bandstand Bandra, next to Rekha's place. It was a sleepy Sunday morning, and Mrs. Akhtar was doing her Sunday things while their daughter was running around the house. It was a normal household with the whiffs of the Sunday lunch peeking out of the kitchen.


Says an actress close to the couple, "First Duggu (Hrithik) and Susanne, then Farhan and Adhuna, now even Arbaaz and Malaikaâ€¦they looked so perfect together. I am losing faith in the institution of marriage. I am convinced more than ever that I will never marry an actor."


The never-marry-an-actor refrain has been gaining ground in the entertainment industry for some years. Temptations for actors, even directors and technicians lurk everywhere. Star-wives discarded their fears of philandering husbands long ago and replaced that fear with a resigned acceptance of husbands who will-to put it in the words of a star wife-"have fun when they are shooting since the heroines throw themselves at him. He is a man. He can't help it. But once he is home he is completely with me and the children and I am happy with that."


The star-wife has a point. Sexual gratification is no longer an under-the-counter commodity. None of the coy touch-me-not act that heroines would put on in earlier eras. Now there is a lot of sexual frankness in the entertainment industry. This perestroika of the libido has its disadvantages. There is a lot more one-night-stands, flings and unconditional affairs happening than before.


I see a lot more seemingly steady and stable marriages breaking up during the year, perhaps because some male partners in a 'happy' marriage would have crossed the threshold of endurance. Perhaps some wives would say, enough is enough.


I am sure there were reasons for the Farhan-Adhuna break up that we know nothing about, we never will. And that's the way it should be. But that doesn't stop us from wondering where love has gone. That is what Rekha must be wondering while looking out of her window.


Explaining why so many marriages are coming apart years of compatibility Shabana Azmi says, "Not only in the film industry but also in many sections of society. The expectations from marriage are changing. When I asked Zoya this question she said, 'Because today women can, they have a choice and they exercise it. Marriage is not a one-way street. Both partners have to adjust to each other. The concept of made in heaven is defunct."