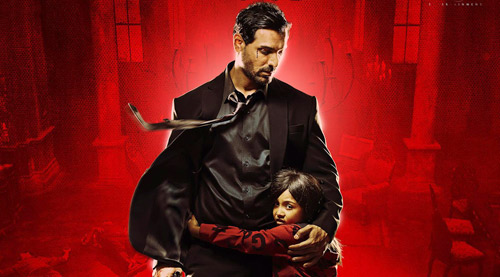 In his career spanning 13 years and around 50 films, John Abraham may have broken quite a few bones (both of his own as well as that of baddies) and indulged in some hardcore

action that included some dare-devil stunts. However, when it came to Rocky Handsome - which as per the makers is an ultimate for hand-to-hand action when it comes to Indian flicks - he

wanted to be sure that the child artist in the film, Diya Chalwad wasn't impacted. While it was a given that she would be kept safe physically, even mentally as well as emotionally she had to be

"She is a child after all, and there was no reason why she had to see all the action being actually shot in front of her eyes," informs our source from Rocky Handsome, "It is a different

thing when you see that on screen because there it is all cool and sexy. However, you can't have kids under 12 years old be exposed to such kicks and punches at the actual shoot. We made sure that

Diya was not around on the sets while John was beating the pulp out of the antagonists."

The premise of the film necessitated though that John did indulge in some action when Diya too was on the scene.

"Such shots were taken separately," says producer Sunir Kheterpal of Azure Entertainment, who has made the film in association with John Abraham, "It was ensured that there were bare minimum shots

where John, Diya and action were in the same frame. Diya had to be safeguarded by all means. It was non-negotiable. Period."

Meanwhile, good care was taken that for female audience in general across all age groups; the action never took a gory turn.

"This is where I step in," says John, "I wanted Rocky Handsome to be very much liked by the women audience. It isn't just for the men or certain section of audience. As a matter of fact we

also tested the action with female audience after we shot for it. We showed it to a sample size audience and I can proudly say that women totally loved it. Reason being that action here is not at

What further pleased John was the word of assurance that he got from Diya herself.

"When Diya saw the film while dubbing, she said - 'John sir, yeh action bahaut achcha hai'. These words mattered to me the most, and over and above anyone and everyone else's," smiles John before