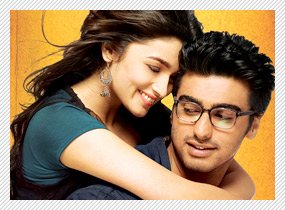 2 States released this week and there are some understated gems that Bollywood Hungama would like to share with you!

- That an IIM graduate would be extremely proud of the fact that she earns a princely salary of Rs. 50000 per month

- That a girl would actually come close to threatening this marriage from being called off by embarrassing the hell out of a groom, who by the way is an absolute stranger to her

- That there are loud mouthed Punjabi women out there who actually reek of racism, have money on their minds all the time and do not hesitate demanding for gifts from prospective in-laws

- That a reasonably educated woman would seriously exclaim something on the lines of - 'Yahan logon ko faansi lagai jaati hai' - when told about 'Hanging Garden' in Mumbai (or was she just kidding too?!)

- That on the day they have a prospective groom and his parents at home, a conservative South Indian family would let their daughter's boyfriend to hang around and even enter her bedroom for a casual chat

- That 'Yes Bank' is the best in the business, 'Sunsilk' is a brand that IIM graduates die to step in, 'Samsung' is the chosen laptop for all, 'Nathus' is Delhi's favorite sweet shop and 'Mazaa' is the preferred drink for Punjabi ladies