Salman Khan and Priyanka Chopra still seem to be at war or maybe it's just Salman's way of joking with the actress. The actress had to leave her comeback project Bharat a month before the film went on the floor due to her wedding plans with Nick Jonas. Katrina Kaif was roped in soon and stepped into the role of Kumud aka Madam sir. But, she had very little time to prepare for the role of Kumud Raina. In an exclusive interview with Bollywood Hungama, Salman Khan took a sly dig at the actress for exiting the project. 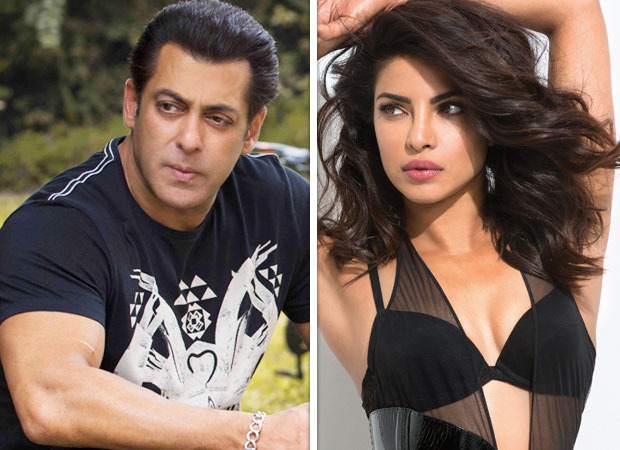 Katrina Kaif was speaking about her role and said, "When he wrote this character originally, I was not there." Salman quickly interrupted and quipped, " There was Priyanka Chopra who was trying to..." Katrina stopped him by saying, "Relax, Relax" when Salman said, "Thank you, Priyanka."

Salman Khan further said, "She is not there in the film but she can help in the promotion of the film because it was, you know, she had also loved the script." Talking about her character, Katrina said, "I think Kumud is the best character I've had the chance to play. It's definitely one of my most personal favourites."

Furthermore, Salman quipped about Priyanka choosing her personal life over her professional and said, "And she (Priyanka Chopra), over Bharat, did choose USA in the nick of time. She has worked hard all her life, okay? And when she got the biggest film of her life, she dumped that film and got married. You know, HATS OFF! Usually, people leave their husbands for films like these."

Salman Khan, ever since 'Zinda' song launch, has said that Katrina Kaif deserves to receive National Award for Bharat. In the interview, he said, "You know, she thinks I am joking. I don't think anyone else thinks that. I think, who all have seen the promos, I think 1000 %, she can win National Award for it. I think a film bigger than this and inspiring than this, a film related to our country, I don't think it will come anytime soon. A film which has action, comedy, a growth of the country with the growth of Bharat (character), journey of him and growth of Kumud. It also has age groups from childhood to older age, there's a difference in the body language, there's a difference in the age, there's a difference in performances. So, I think this National Award, Inshaallah, should go to her unless somebody comes up with, you know, incredible performance and a film much better than this. It is the faith of the film whether it works or not, it all depends on the audiences. I don't think anybody would feel any kind of disappointment from this film."